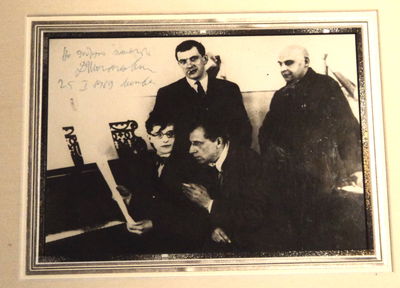 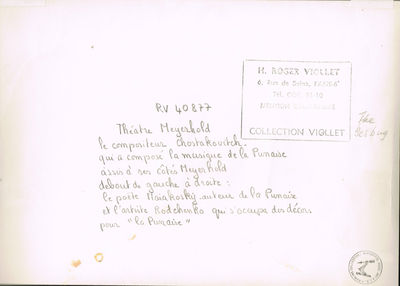 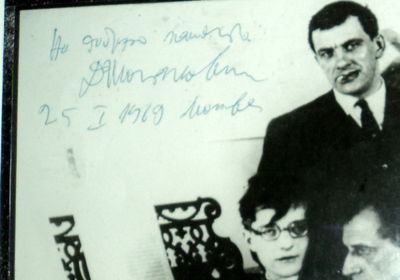 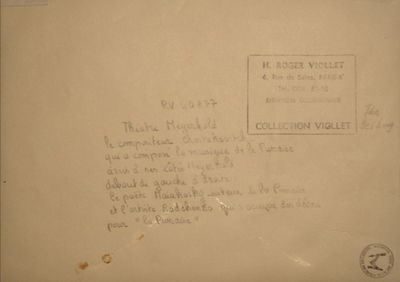 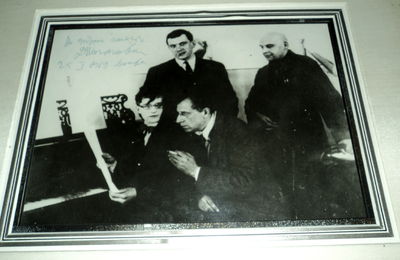 A SIGNIFICANT PHOTOGRAPH SIGNED BY SHOSTAKOVICH. A most famous photograph of this important gathering of Russian artists, each of whom contributed to the play "The Bedbug", inscribed and signed by the great modern Russian composer

Moscow, 1969.. 1969.. Very good. INSCRIBED AND SIGNED BY SHOSTAKOVICH - sc A 6-1/2 inch high by 9-1/4 inch wide black & white gelatin silver photograph distributed by the photographic agency of H. Roger Viollet, with their stamp on the verso. This famous image from September 19, 1929, depicts the young bespectacled Shostakovich seated at the piano holding up a sheet of the music for the Bedbug so that Meyerhold, the director of the play who is seated next to the composer with a cigarette in hand, can look at the page. Standing behind the two, a cigarette dangling from his mouth, is the poet and author of the play Vladimir Mayakovsky with the great painter and photographer Alexander Rodchenko who designed the sets for the production, standing at the viewer's right. Shostakovich has inscribed the photograph at the top left in Russian with words equivalent to "Best Wishes". The inscription and signature, penned in blue ink, is signed "D. Shostakovich" and dated "25 I 1969 Mokba". The photographic agent's credits, stamped on the verso, state "H.Roger Viollet / 6, Rue de Seine, Paris - 6e / Tel. ODE. 81-10 / Attention Obligatoire / Collection Viollet". This particular signed photograph is from the collection of the autograph collector and scholar Ray Rawlins, who wrote numerous books on the subject, with his discreet oval collector's mark stamped at the bottom right of the verso, illustrated with a device of an arm holding an arrow and the words "Rawlins Collection: Historical Docs and ALS". The photo is further annotated in pencil on the verso: "RV 40877 / Theatre Meyerhold / le compositeur, Chostakovitch / qui a compose la musique de la Punaise / assis a ses cote Meyerhold / debout de gauche a droite: / le poete Maiakisky, auteur de la Punaise / et l'artiste Rodchenko qui s'occupe des decors pour 'la Punaise'." There are light brownish diagonal stains to the lower left of the verso with some minor creasing. The photograph is mounted into a mat with document tape from the top corners of the verso. The image itself has but some light spotting to the image and minor soiling to the left edge, likely due to the overlap of the mat. There is some very minor fading and some very few spots most likely the result of the developing process. A rare and very significant signed photograph.

Provenance: From the collection of Ray Rawlins, author of "The Stein and Day Book of World Autographs".

Along with Meyerhold, Mayakovsky and Rodchenko, Shostakovich embraced the Soviet Revolution which, by its nature, seemed to promise to liberate the arts from the constraints of staid conservative tradition. And though the promise seemed to hold true at first, allowing great creativity and experimentation, the artists were to find themselves criticized by those in power with little tolerance for those whose work even hinted at opposition. Shostakovich found himself alternately being hailed as a hero of Soviet music, denounced as a formalist and attacked by Pravda. Such denunciation in Stalinist Russia could well lead to arrest. Indeed many of Shostakovich's friends and family were arrested or executed during the years of terror. In the early period from 1921 to 1927, the Bolshevik's experimentation with a New Economic Policy allowing some limited private enterprise resulted in considerable freedom and the arts flourished. Even criticism of the NEP and government policy was tolerated to some degree. But the line was always a fine one and by 1927 Stalin tightened his grip on the economy and the arts. It was in the period following 1928, the year Stalin buried the NEP, that the futurist poet Mayakovsky wrote his play "Klop" [The Bedbug] for Meyerhold. It was an ambiguous satire of Soviet society. Shostakovich composed the incidental music for the play, his Opus 19.

Title: A SIGNIFICANT PHOTOGRAPH SIGNED BY SHOSTAKOVICH. A most famous photograph of this important gathering of Russian artists, each of whom contributed to the play "The Bedbug", inscribed and signed by the great modern Russian composer

A SIGNIFICANT PHOTOGRAPH SIGNED BY SHOSTAKOVICH. A most famous photograph of this important gathering of Russian artists, each of whom contributed to the play "The Bedbug", inscribed and signed by the great modern Russian composer