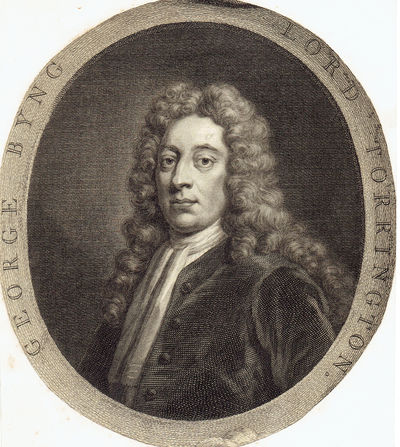 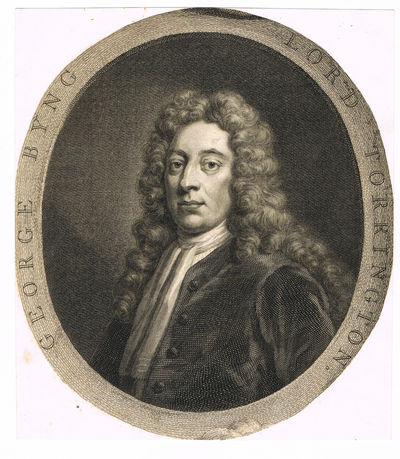 British Admiral and Statesman, George Byng, 1st Viscount Torrington (1668-1733) served as First Lord of the Admiralty under King George II. He began his naval career as a King's Letter Boy and, as a Lieutenant in 1683 shipped for the East Indies. A supporter of William III, Prince of Orange, he played a crucial part in the Revolution of 1688 which brought about the ascension of William to the throne of England. As commander of the ship "Nassau", he took part in the capture of the French Fleet at Vigo in 1702 and was soon after promoted to Vice-Admiral. He received a knighthood for his part in the Battle of Malaga. Promoted to full admiral in 1708, he fought against the Jacobite uprising and commanded the fleet which routed the Spanish at the Battle of Cape Passaro. He was rewarded for this latter feat with the full power to negotiate, on England's behalf, with the Princes and states of Italy. His role in assisting the Germans in taking Messina and destroying the remaining Spanish fleet was highly rewarded. He was made rear-admiral of Great Britain, member of the privy council, and became Baron Byng of Southill in Bedford and 1st Viscount Torrington of Devon. Made a Knight Companion of the Order of the Bath in 1725, he was named First Lord of the Admiralty by King George II in 1727. In this capacity he established the Royal Naval College at Portsmouth. First Edition.