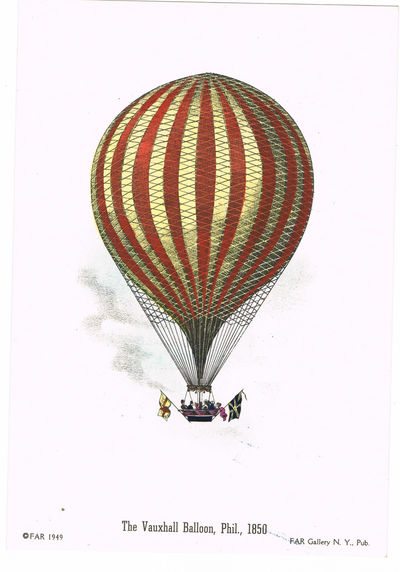 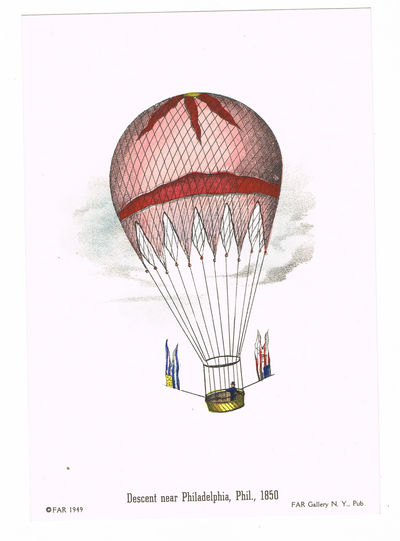 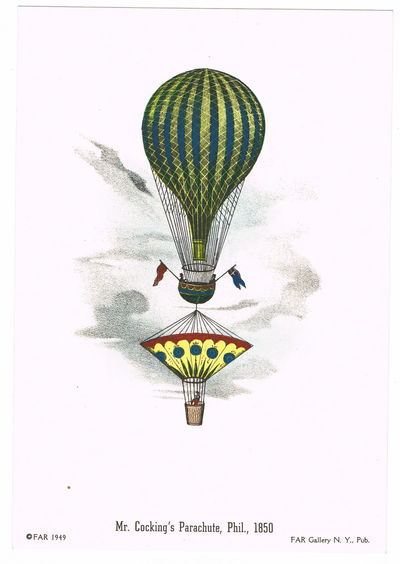 New York: FAR Gallery, 1949.. 1949.. Fine. - sc 4 fine bright hand-colored lithographs depicting events in the history and birth of flight. Each of these beautiful prints is lithographed on 8 inch high by 5-1/2 inch wide cardstock. There is a little minor smudging at the bottom of the lithograph depicting "The Vauxhall Balloon", else the prints are in fine condition.

The "Descent near Philadelphia, Phil., 1850" of a single pink balloon topped with a red & yellow floral accent and horizontal red stripe. A yellow and blue flag and the American flag fly from either side of the yellow gondola wich carries a single person.

The "Descent Near Easton, Pennsylvania" depicts a shredded dark & light blue balloon. The basket gondola, carries a single man who holds out his top hat. American flags fly from both sides of the gondola.

"Mr. Cocking's Parachute, Phil., 1850" depicts the Nasau balloon with Cocking's parachute attached at the bottom. A watercolorist and amateur scientist, Robert Cocking designed his parachute based on that of Garnerin's. The blue & yellow striped balloon, which ascended from London's Vauxhall Gardens in 1837, carries 2 passengers in its gondola. The yellow, red and blue inverted cone parachute, attached under the balloon's gondola, carried Cocking aloft in its own basket gondola. Cocking's experiment ended in tragedy. Releasing his parachute at a height of 5,000 feet, it failed due to a mechanical error and Cocking plummeted to his death.

A rare group of prints, examples of which are housed at the National Air and Space Museum.