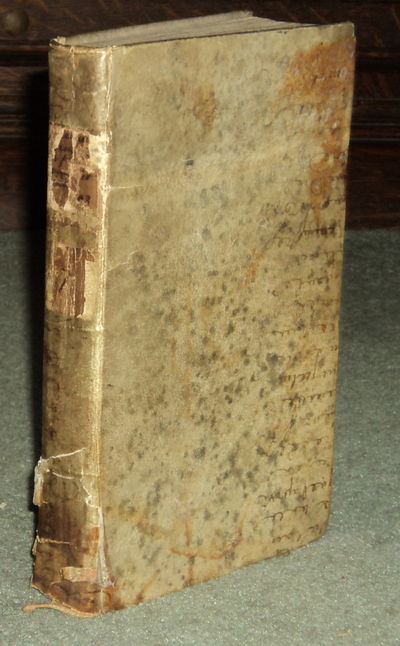 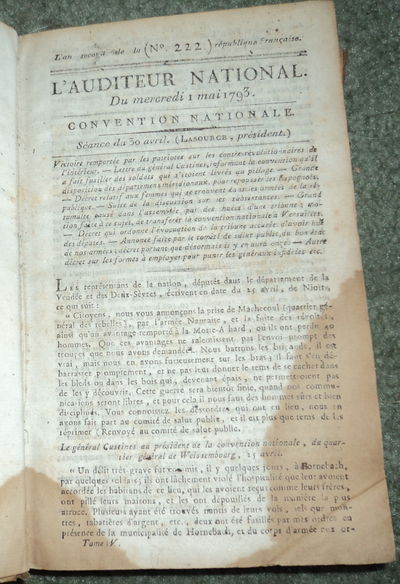 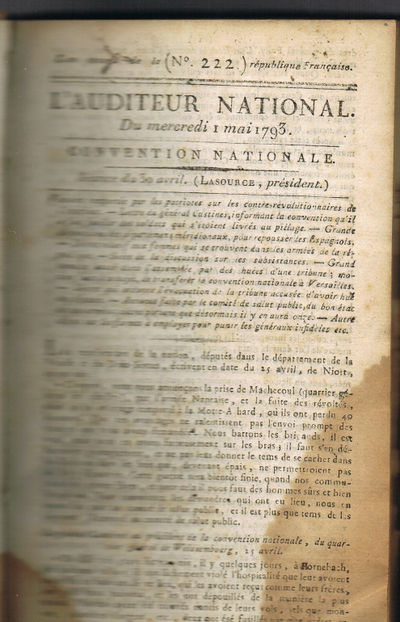 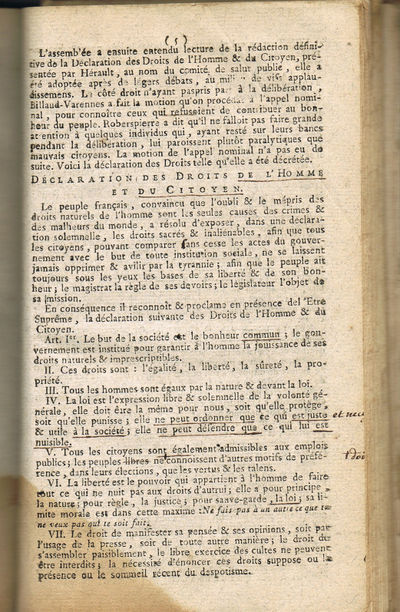 - Octavo, 8-1/4 inches high by 5 inches wide. 60 issues bound together into contemporary full vellum with holographic title labels on the spine. Faded ink annotations on the covers would suggest that the vellum covers themselves were recycled at the time from even earlier documents. The covers are stained, the labels are chipped and the bottom portion of the spine is heavily chipped. 480 pages in all, each issue consisting of 8 pages with a banner title at the head of the first page of each issue and the publisher's credits printed at the bottom of the last page of each issue. The bottom front corners of the pages are heavily dampstained. There is minor worming with very slight loss to the first issue (#222), and a very minor wormhole to issues 233 through 235 with occasional loss of a letter. A small piece torn from the bottom corner of the last leaf of issue #227 results in the loss of but one letter. Pages 5 and 6 of issue #244 are torn but without loss, although there is some slight loss to pages 6 and 7 where the pages once stuck to each other. Several page corners are creased. There is some rare occasional underlining in ink with even fewer discreet marginal annotations. A good consecutive run of this scarce periodical covering the National Convention during the years it forged France's first republican constitution during the French Revolution.

This daily evening newspaper provides a day by day account of the events that took place during one of the most remarkable periods in French history. Among the important events of this period were the uprising of the Paris Commune against the Convention, the formation of the Extraordinary Commission of Twelve (Commission extraordinaire des Douze), the revolt of June 2, 1793 which led to the expulsion of the Girondists and the rise of the Jacobins, the establishment of a maximum price for bread, and most important, the debate which ultimately led to the ratification on June 24, 1793 of the new Constitution. This Constitution included the expanded "Declaration of the Rights of Man and Citizen" (Declaration des droits de l'homme et du citoyen). It was this period of time that set the stage for the Reign of Terror.

The publication of the articles (chapitres) of the first republican constitution (also known as the the "Montagnard" Constitution) commences in the June 12, 1793 issue of the newspaper (No. 264). The 36 articles of the DECLARATION DES DROITS DE L'HOMME ET DU CITOYEN are published in the issues of June 24/25, 1793. These rights, expanded from the 1789 Declaration, now included the abolition of slavery, the right of rebellion, the right to work, to public education and public assistance, and the right of association.

The writing of this constitution is often attributed to Marie-Jean Herault de Sechelles.