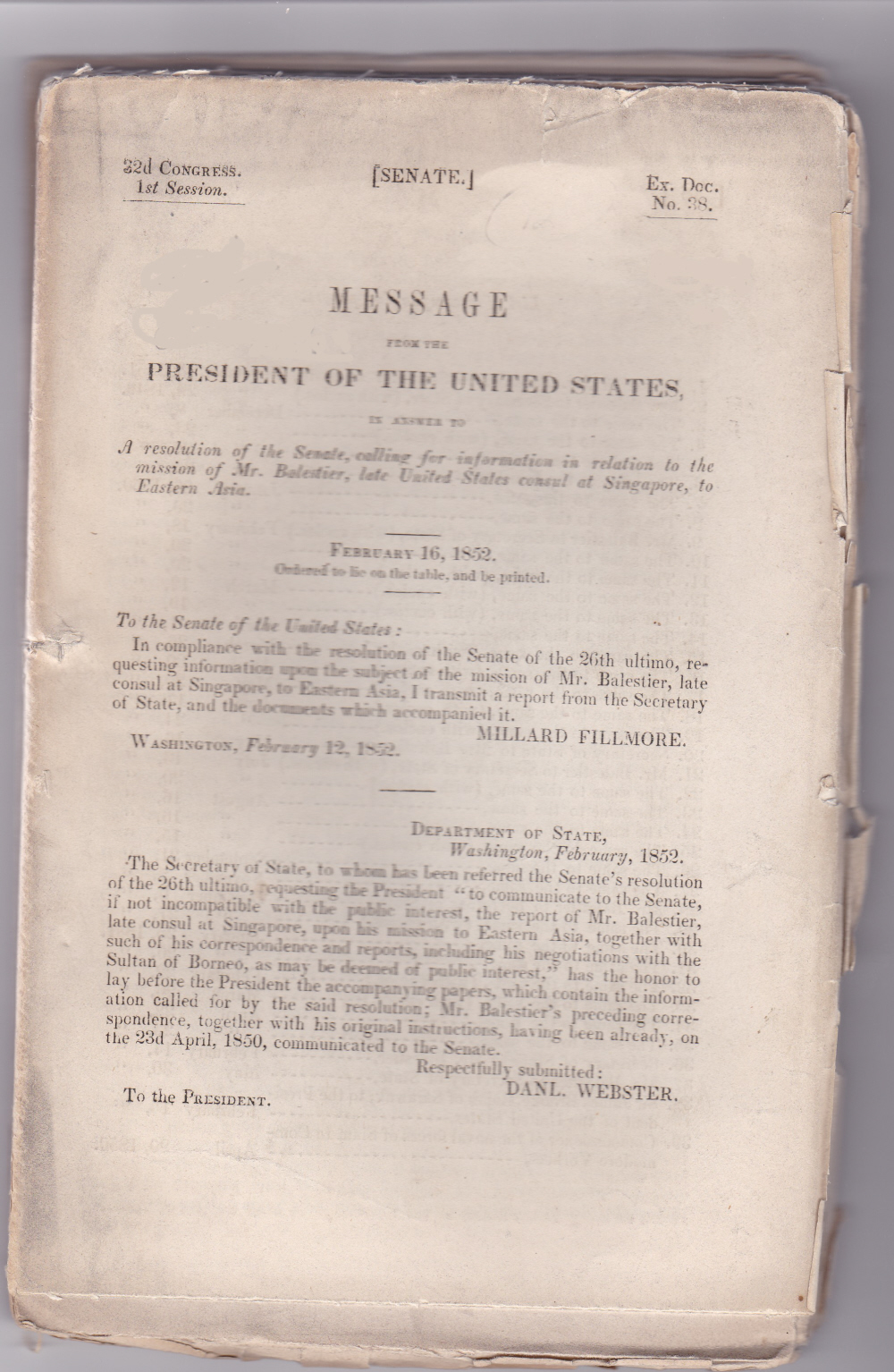 [REPORT ON JOSEPH BALESTIER'S MISSION TO SIAM]: MESSAGE FROM THE PRESIDENT OF THE UNITED STATES, in answer to a resolution of the Senate, calling for information in relation to the mission of Mr. Balestier, late United States consul at Singapore, to Eastern Asia. (32d Congress. 1st Session. Ex. Doc. No. 38).

Washington, D.C., 1852.. 1852.. Good. - Octavo, 9-1/2 inches high by 6-1/8 inches wide. Softcover, unbound printed self-wraps consisting of 4 gatherings attached with a single stitch. 125 deckle-edged pages. The edges of the title page are soiled and darkened with a tear and chips to the top edge. The overlapping edges of several pages are chipped. Page 19 is tightly trimmed with minor loss to the text along the bottom edge and there is a tear to the bottom edge of another page. Good.

President Millard Fillmore's report to Congress on the American mission sent to Bangkok, led by former American Consul to Singapore Joseph Balestier, in an effort to secure treaty arrangements to open trade with Siam. The report includes Balestier's correspondence and letters from 1849 through 1851 addressed to various American and Thai officials, including the U.S. Secretary of State, the Sultan of Bruni, the Siamese Commissioner of Naval Forces, U.S. Naval Commander P. F. Voorhees, and others. The correspondence often originates from aboard the U.S. Flagship Plymouth or from various Asian embassies.

Although the first American ship reached Bangkok in 1821 and a Treaty of Amity and Commerce was signed between the U.S. and Siam in 1833, only 2 American vessels had traveled to Siam to trade between 1828 and 1836, and none from 1838 through 1850. In 1850, both the American and British governments sent missions to Bangkok seeking to negotiate new treaties. The American mission was led by Joseph Balestier, the former American Consul to Singapore.

In the 1830's Joseph Balestier was one of the first men to own a 1,000-acre sugar cane plantation in Singapore. He was soon appointed Consul for the port of Rhiau and subsequently Singapore. He was a significant figure in Singapore and both a road and a district are named after him. In the latter part of the 1840's, business declined due to competition and lack of import privileges to the home market. Following the death of his wife, Paul Revere's daughter Maria Revere Balestier, he was forced to sell his entire property. He soon returned to Washington to convince Secretary of State Daniel Webster to send him on a diplomatic mission to South East Asia to negotiate treaties. However, the mission was beset by difficulties from the beginning. His relationship with Commodore P.F. Voorhees began badly and deteriorated as the voyage progressed. Balestier regularly communicated their disagreements to the Secretary of State, forwarding copies of his letters to Voorhees, thus aggravating the situation. Balestier blamed Voorhees for the failure of the mission, placing some of the blame on Voorhees' failure to send a military escort with him when he met with high-ranking officials. Voorhees had been loathe to endanger his men due to reports of a cholera epidemic. As the ship's tour was coming to an end and Vorhees and his crew were due back home, Balestier stayed on anticipating that a new American flagship would soon pick him up in Batavia. He spent six months waiting and, when word did reach him, it was to inform him that his mission had been terminated. The failure of the mission was not solely due to Balestier's disgreement with Voorhees. Not only was Siamese bureaucracy frustrating but, according to a letter produced by Voorhees, a Siamese admiral claimed that Balestier had been rude and insulting to his hosts. China's royal court had also refused to meet with him due to previous dealings with him in Singapore. Voorhees' version of events stirred up controversy in Washington and, on two occasions, the Senate asked to see Balestier's correspondence.

Title: [REPORT ON JOSEPH BALESTIER'S MISSION TO SIAM]: MESSAGE FROM THE PRESIDENT OF THE UNITED STATES, in answer to a resolution of the Senate, calling for information in relation to the mission of Mr. Balestier, late United States consul at Singapore, to Eastern Asia. (32d Congress. 1st Session. Ex. Doc. No. 38).

[REPORT ON JOSEPH BALESTIER'S MISSION TO SIAM]: MESSAGE FROM THE PRESIDENT OF THE UNITED STATES, in answer to a resolution of the Senate, calling for information in relation to the mission of Mr. Balestier, late United States consul at Singapore, to Eastern Asia. (32d Congress. 1st Session. Ex. Doc. No. 38).