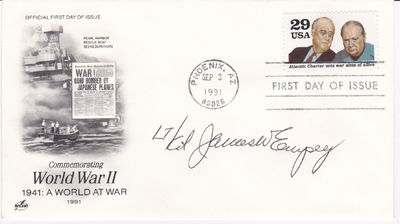 World War II fighter pilot James W. Empey [1924-2013] became an ace at the young age of 20 when he shot down five German aircraft within a month in 1944. After the war he returned to the United States and became a training instructor. He subsequently attended the Air Force's experimental test pilot school and in 1962 was sent to Oklahoma State University to earn a degree in aeronautical engineering. He volunteered to go to Vietnam and flew missions throughout that war, retiring from the Air Force in 1972 as lieutenant colonel. During his years of service he was awarded the Silver Star, two Distinguished Flying Crosses and a total of 27 Air Medals. He was also inducted into the Commemorative Air Force American Combat Airman Hall of Fame in 2009.