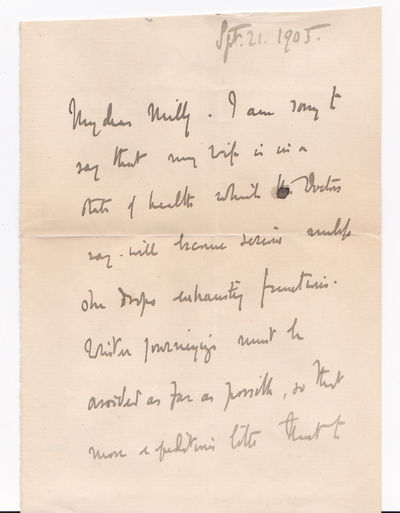 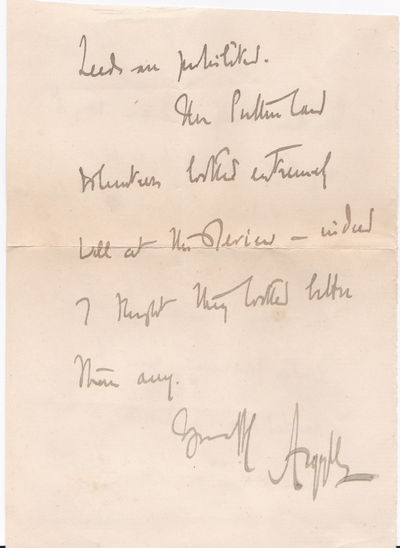 September 21, 1905.. 1905.. Very good. - Letter penned in black ink filling both sides of a sheet of cream- colored 6-1/4 inch high by 4- 1/2 inch wide paper. Signed "Argyll". There is some very minor soiling to the letter with a small area of light creasing to the top edge. There is an ink blot to one word on the first side. Folded once for mailing. Very good.

Argyll writes about his wife's health: "I am sorry to say that my wife is in a state of health which the Doctors say will become serious unless she stops exhausting functions. Winter journeying must be avoided as far as possible, so that more expeditions like that to Leeds are prohibited...."

John Campbell, 9th Duke of Argyll [1845-1914], usually better known by the courtesy title Marquess of Lorne, was the fourth Governor General of Canada from 1878 to 1883. In 1871 he married Princess Louise, the fourth daughter of Queen Victoria, the first time since 1515 that a daughter of the sovereign had married a subject of the crown. When his Canadian appointment was announced there was great excitement throughout Canada at the idea of having a royal resident in Rideau Hall, though the press disapproved. Lord Lorne was intensely interested in Canada and Canadians and he and his wife made many lasting contributions to Canadian society, especially to the arts and sciences. A number of Canadian places were named in honor of Lorne and his wife.