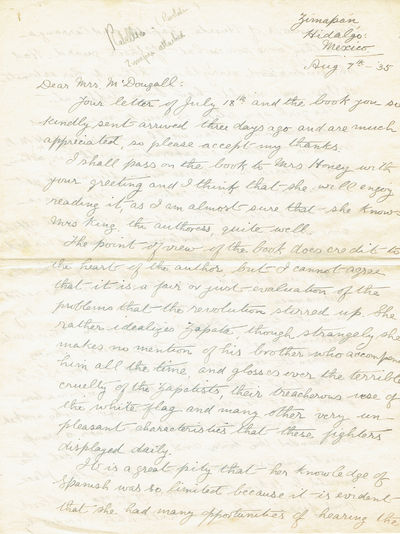 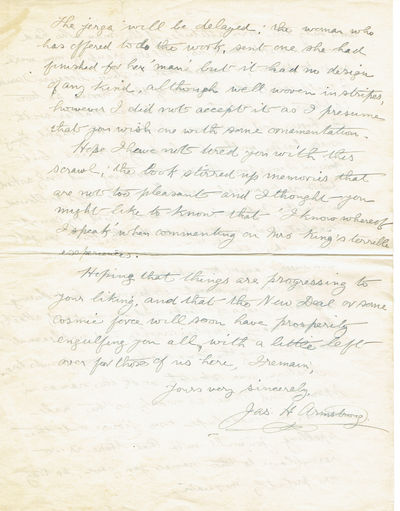 THE MEXICAN REVOLUTION. A 6-PAGE AUTOGRAPH LETTER SIGNED. A first hand account of an attack on the village of Zimapan by "rebels" [Zapatistas].

- sc - Six pages consisting of over 1,000 words penned on both sides of 3 sheets of 10-1/2 inch high by 8-1/8 inch wide buff-colored paper. In a lengthy letter James H. Armstrong, the author of this account, responds after reading a book which Mrs. McDougall has sent him. The book, Rosa E. King's "Tempest Over Mexico" which had just been published that year, has stirred up Armstrong's memories and feelings. He doesn't view the "rebels" (The Liberation Army of the South, known as the Zapatistas) with as much fondness "She rather idealizes Zapata, though strangely she makes no mention of his brother who accompanied him all the time, and glosses over the terrible cruelty of the Zapatists...." He goes on to describe, at length, an attack by the Zapatistas "When the town was attacked by the rebels for the first time, I had advance information from one of the rebel sympathizers who worked for us, so was not surprised when a group surrounded the town and demanded that the small garrison surrender or else the place would be taken by 'sangre y fuego' - 'blood and fire!' The town authorities decided to resist and the women and children of the principal families were gathered into the big house...." He goes on to describe that night and the "all-day attack" which followed until "through their scouts the rebels received word that a relief column was coming, so they retired and that unpleasant spell was over." Describing a subsequent attack, he writes of joining the "Jefe Politico, a very good friend" who'd organized a little band of volunteers to escort the women as they would all try to reach the next town. The group was overtaken and, to protect the women, surrendered to the Zapatistas. "As a foreigner, I was deputed to approach with a white flag and arrange terms. One of the women gave me her white petticoat to flaunt and up the hill I went...." Signed "Jas. H. Armstrong". The pages are folded once horizontally and twice vertically for mailing. There is some minor soiling with creasing to the right edge. Very good.

A very entertaining first hand account of an event during the Mexican Revolution.

The writer, James H. Armstrong was an American superintendent of the Hidalgo Copper Mining & Smelting Company in Zimapan, Hildago.

Title: THE MEXICAN REVOLUTION. A 6-PAGE AUTOGRAPH LETTER SIGNED. A first hand account of an attack on the village of Zimapan by "rebels" [Zapatistas].

THE MEXICAN REVOLUTION. A 6-PAGE AUTOGRAPH LETTER SIGNED. A first hand account of an attack on the village of Zimapan by "rebels" [Zapatistas].