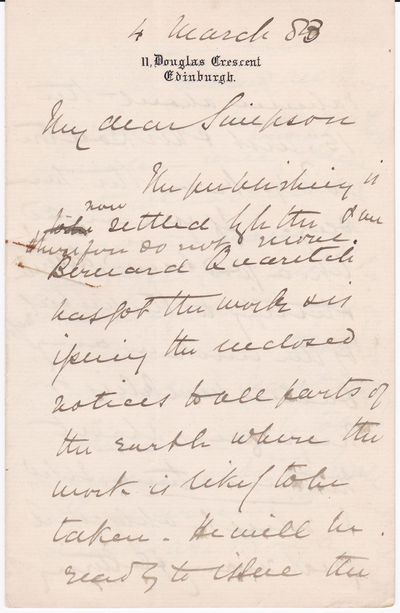 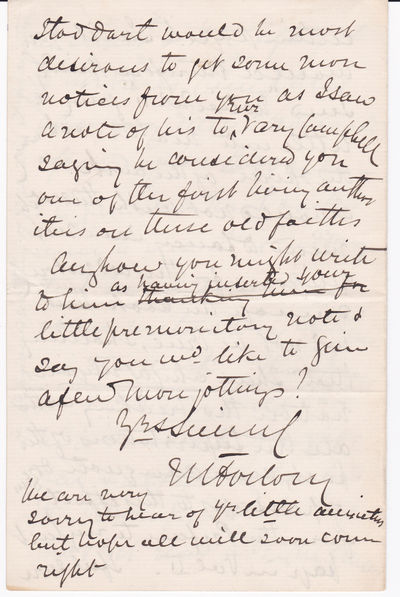 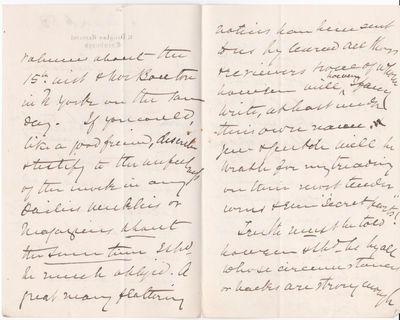 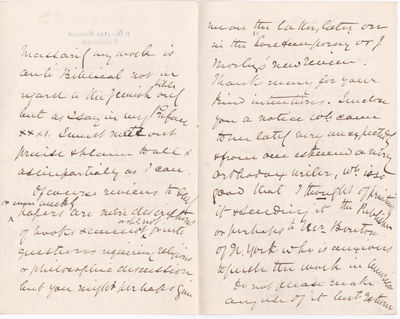 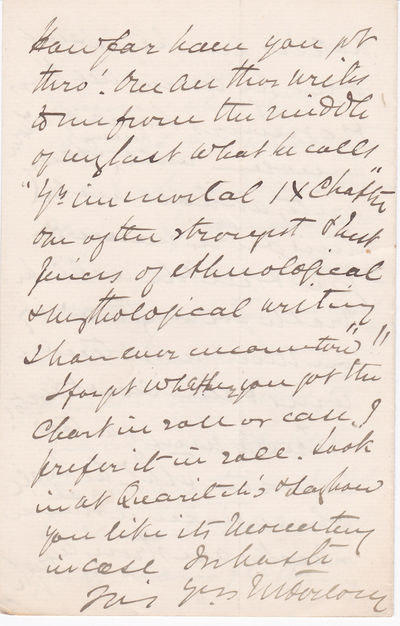 THREE AUTOGRAPH LETTERS SIGNED BY JAMES FORLONG AT THE TIME OF PUBLICATION OF HIS MAJOR WORK "RIVERS OF LIFE".

- Each letter is penned in black ink and fills all 4 sides of his cream letterhead, which is folded once to form 4 sides, each 7 inches high by 4-1/2 inches wide, with Forlong's Edinburgh address printed at the top of the first side. The letters are signed "J. Forlong". Folded twice for mailing. Very good.

James George Roche Forlong (1824-1904) was a Major General of the Indian Army. Trained as an engineer in Scotland and England, he joined the Indian Army in 1843 and later held posts with the government of Oudh. His exposure to Indian religions led him to explore, research and develop heterodox ideas about religious origins. His substantial work "Rivers of Life" was regarded as blasphemous by some for its sexual interpretations of religious rituals and symbolism.

These three letters, all with excellent content, are written to a Mr. Simpson, who is regarded by the editor of the Glasgow Herald James Stoddart as "one of the first living authors" on ancient religions. The letters concern the process of publishing and promoting "Rivers of Life". It was scheduled to be published that spring by Bernard Quaritch, along with its accompanying chart, which Forlong would prefer to have distributed in a case rather than rolled up. The letters are largely devoted to pressing Simpson to help publicize the book: "If you would like a good friend, testify to the usefullness of the work in any Dailies Weeklies or Magazines about the same time I shd be much obliged." One author tells Forlong "Yr immortal IX Chapter [is] one of the strongest and best pieces of ethnological & mythological writing I have ever encountered". However, Forlong seems anxious that the controversial content of his opus, which includes research on phallic religions and is frank about the sexual nature of many rites and ceremonies, will offend the reviewers. "[They] will be wrath for my treading on their most tender corns & even 'secret parts'!" On how to approach the book, Forlong urges Simpson on March 6: "I wish you would not do your thorough reading of the vols until you have dashed thro them all & especially my last chapter No. IX wch goes systematically into the philosophical questions especially from p 459 to the end." Forlong is also concerned that he will not be viewed as anti-religion or irreligious. "Necessarily my work is anti biblical not in regard to the Jewish bible only but as I say in my Preface xxxi I will mete out praise & blame to all as impartially as I can." He writes further on April 13th, "I wish you would therefore kindly send 'Notice No. II' going a little into matters & showing the spirit of the work. I would not wish the Scotch view to fancy I am not religious for this wd not only damage the book but wd not be true, I holding that I have a highly religious nature tho breaking with all the superstitions of the past..."

Title: THREE AUTOGRAPH LETTERS SIGNED BY JAMES FORLONG AT THE TIME OF PUBLICATION OF HIS MAJOR WORK "RIVERS OF LIFE".

THREE AUTOGRAPH LETTERS SIGNED BY JAMES FORLONG AT THE TIME OF PUBLICATION OF HIS MAJOR WORK "RIVERS OF LIFE".