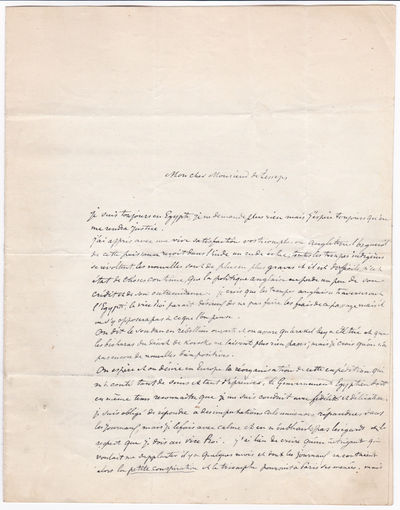 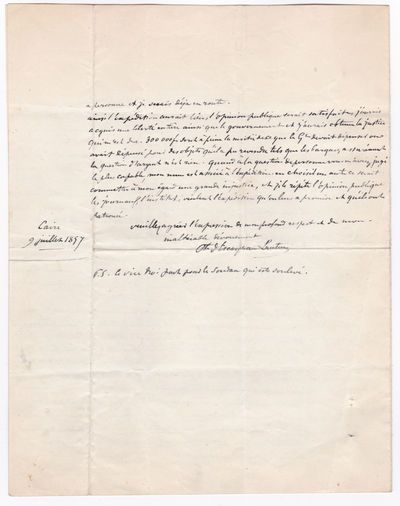 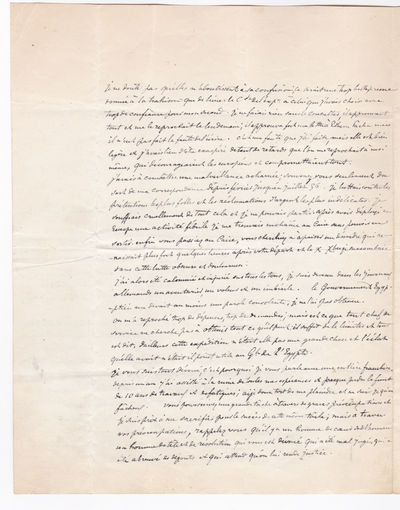 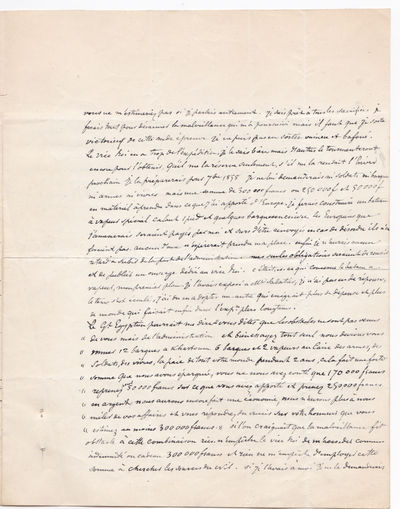 A SUBSTANTIAL 4-PAGE AUTOGRAPH LETTER SIGNED by STANISLAS D'ESCAYRAC DE LAUTURE, MARQUIS D'ESCAYRAC, while on his expedition to discover the source of the Nile, to FERDINAND DE LESSEPS, the developer of the Suez Canal.

By: d'Escayrac de Lauture, Stanislas (Marquis d'Escayrac), (1826-1868). French Explorer, geographer and linguist tasked with finding the source of the Nile.

- Four pages, each 8-1/4 inches high by 6-1/2 inches wide. Well over 1,060 words densely penned in a neat hand, with wide left margins, on 4 sides of a folded sheet of creamy white paper. Signed "St. d'Escayrac de Lauture". There is some minor darkening along the edges. The letter is folded several times, both horizontally and vertically, for mailing. There are two minuscule holes from a straight pin along the lower portion of the left margin. Very good.

A very important letter written from Cairo by Stanislas d'Escayrac de Lauture to Ferdinand de Lesseps. De Lesseps had previously, on January 23, 1856 to be precise, written to d'Escayrac in an attempt to persuade him to explore the source of the Nile. D'Escayrac was subsequently appointed to lead the Nile expedition by the Viceroy of Egypt. According to J.W. Heldring, who wrote about the exploration of the Nile in "The Killing of Dr. Albrecht Roscher": "On the Egyptian side, a number of Egyptian army officers were appointed to take command of the military aspect of the project. The expedition never left Cairo. Internal bickering between d'Escayrac and the officers made it impossible to get anything done. It was a complete disaster and the expedition was dissolved." In the midst of this debacle, a beleagured d'Escayrac penned this letter. He, at first congratulates de Lesseps for his triumphs in England, two years before the founding of the Compagnie universelle du canal maritime de Suez and then provides an extensive account of his disappointments with the expedition.

"Je suis toujours en Egypte, je ne demande plus rien mais j'espere toujours qu'on me rendra justice" [I am still in Egypt, I no longer ask for anything but always hope that I will be done justice] writes the Marquis d'Escayrac to Ferdinand de Lesseps in the opening sentence of this substantial letter. Congratulating de Lesseps on his triumphs in England, he comments on the losses suffered by Britain as indigenous Indian troops yet again revolt. He observes that the British have lost some of their political credit overseas and he points out that when British troops traverse through Egypt the Viceroy has expressed his intent that he will not pay the costs of this passage. D'Escayrac's expedition has been plagued by disagreement and bickering between him and Egyptian army officers who are to accompany him on the voyage. Others in Europe want to see a reorganization of this expedition which has cost him so much: "On espere et on desire en Europe la reorganisation de cette expedition qui m'a coute tant de soins et tant d'epreuves...." One can only guess whether he means that they would see the expedition through despite rumors spread by those who would seek to oust him or whether he's implying that they would like to see the expedition reorganized under different leadership. He expresses the hope that the Egyptien government acknowledge that he has conducted himself with fidelity and dedication: "...le Gouvernement Egyptien dont en meme tems [sic] reconnaitre que je me suis condiut aver fidelite et dedication..." as he is presently obliged to defend himself against slanderous accusations printed in newspapers which likely originate from those members of the expedition who disagreed with him and wish to take it over: "J'ai bien de croire qu'un instigant qui voulait me supplaner il y a quelques mois et dont les journeaux racontraient alars la petite conspiration....". D'Escayrac feels betrayed by his second in command in whom he had placed much trust and who approved everything he, d'Escayrac, proposed only to repudiate him later on. The bickering and disagreement between d'Escayrac and the Egyptian officers, not to mention the scandalous accusations, resulted in delays which were discouraging to the European backers of the expedition and jeopardized the project. D'Escayrac writes of being beset by foolish expectations and tactless monetary requests: "je luttais contre les pretentions les plus folles et les reclamations d'argent les plus indelicates, je souffrais cruellement de tous cela...." He then expresses his fears that he's now viewed by the German government as an adventurer, a thief and an imbecile: "...je suis devenu dans les gouvernement Allemand un aventurier, un voleur et un imbecile". He feels that the Egyptian government certainly owes him an encouraging word, but they have been silent. He confides his despair to de Lesseps: "...depuis un an j'ai assiste a la ruine de toutes mes esperances et presque perdu le [ ] de 10 ans de travaux et de fatigue...." He begs his friend to remember that he is a man of heart and honor, a resolute man who is devoted to him and who has been ill judged. He goes on to declare that he is ready to make any sacrifice to overcome the malice which pursues him and to come out victorious. Though he indicates his belief that the Viceroy is likely discouraged by the delays and scandals, he still continues to hope for his support and help: "Le vice roi en a trop de l'expedition, je le sais, mais d'autres le tourmenteront encore pour l'obtenir, qu'il me la reserve seulement, s'il me rendrait l'hiver prochain je la preparerais pour 7oct 1858, je ne lu demanderais ni soldat, ni cargoe, ni armes, ni vivres, mais une somme de 300,000 francs..." [The viceroy has had enough of the expedition, I know, but others will pressure him to obtain it... if he should come back to me next Winter I would prepare it [the voyage] for the 7 oct. 1858, asking him not for soldiers, nor cargo, nor weapons, nor rations, but for a sum of 300,000 francs...]. He feels that with this sum he could have a steamship built as he'd first planned and be ready to navigate the Nile. He could hire a crew which he could pay himself and thus avoid conflict with those who would, as has happened, try to displace him as the leader of the expedition. He alternately outlines a proposal by which the Egyptian government itself could save the expedition by providing barges, finances and putting together a crew eliminating those with whom he is now engaged in a power struggle "... ainsi l'expedition aurait lieu, l'opinion publique serait satisfaites, j'aurais acquis une liberte entiere ainsi que le gouvernement et j'aurait obtenue la justice qui m'est due" [...thus the expedition would take place, public opinion would be satisfied, I would have acquired full freedom as would the government, and would have obtained the justice which I am due]. Concerned that there is yet an effort to replace him he reminds his correspondent that to choose another to lead the expedition, in light of the fact that de Lesseps had judged him the most capable and that his name is now so closely associated with the expedition, would do him great injustice. Signed "St. d'Escayrac de Lauture".

The French diplomat Ferdinand Marie, Vicomte de Lesseps GCSI (1805-1894) was the developer of the Suez Canal which, in 1869, joined the Mediterranean and the Red Sea. The Canal subustantially reduced sailing distances between Europe and East Asia, saving precious time. In the 1880's, de Lesseps later unsuccessfully attempted to build the Panama Canal at sea level. Beset by Malaria, Yellow Fever and financial difficulties, de Lesseps' Panama Canal was never completed and the project was eventually bought out by the United States which changed the design to a canal with a series of locks.

The 19th Century French explorer and geographer Stanislas d'Escayrac de Lauture (1826-1868) was called by the Viceroy of Egypt to lead an 1856 expedition to look for the sources of the Nile. Despite the failure of the expedition, which never left Cairo, he was awarded the cross of officer of the Legion of Honor by Napoleon III as a worthy representative of French science abroad. During the Second Opium War in 1860, d'Escayrac led an expedition of scientists and explorers who accompanied the soldiers. Falling into a trap, he was captured and tortured as a hostage of the Mandarins. Mutilated during his captivity , he was eventually released and returned from his captivity in China and dictated his "Memoirs of China" to his brother.

A RARE and significant letter.

Title: A SUBSTANTIAL 4-PAGE AUTOGRAPH LETTER SIGNED by STANISLAS D'ESCAYRAC DE LAUTURE, MARQUIS D'ESCAYRAC, while on his expedition to discover the source of the Nile, to FERDINAND DE LESSEPS, the developer of the Suez Canal.

A SUBSTANTIAL 4-PAGE AUTOGRAPH LETTER SIGNED by STANISLAS D'ESCAYRAC DE LAUTURE, MARQUIS D'ESCAYRAC, while on his expedition to discover the source of the Nile, to FERDINAND DE LESSEPS, the developer of the Suez Canal.