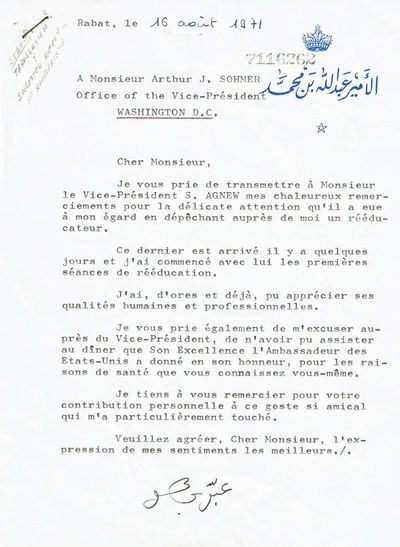 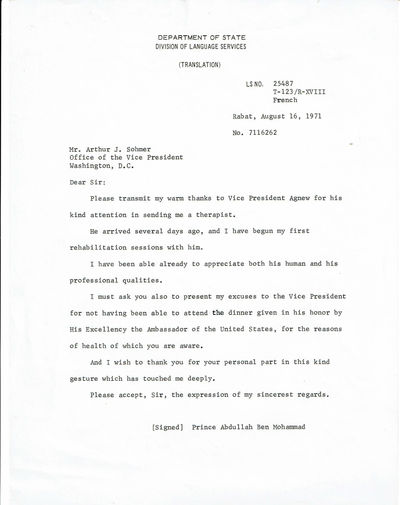 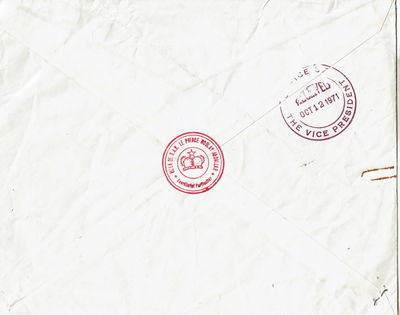 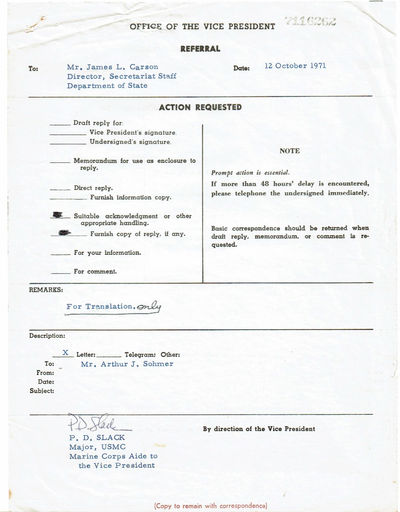 - Over 140 words typed in French on the Prince's 8-1/4 inch high by 6-1/8 inch wide royal stationery with a crown above Maghrebi script printed in indigo at top right. In his letter addressed to Vice President Spiro Agnew's chief of staff Arthur Sohmer, Prince Moulay Abdallah of Morocco requests that Art Sohmer convey his warm regards and thanks to the Vice President for sending him a physical therapist "Je vous prie de transmettre a Monsieur le Vice-President S. AGNEW mes chaleureux remerciements pour la delicate attention qu'il a eue a mon egard en depechant aupres de moi un reeducateur". Vice President Agnew visited King Hassan II of Morocco on July 25th, 1971, only a couple weeks after the attempted coup during which Prince Moulay Abdullah of Morocco was wounded. The prince goes on to praise the skills and personality of the therapist which the Vice President had sent him and apologizes for not having been able to attend the dinner which the American Ambassador had hosted in the Vice President's honor. He further expresses his thanks to Art Sohmer for the latter's own personal contribution and gesture of friendship: "Je tiens a vous remercier pour votre contribution personnelle a ce geste si amical qui m'a particulierement touche". Signed by Prince Moulay Abdullah in Maghrebi script. The letter is creased at the corners and stapled to the original mailing envelope with the oval red ink seal of the prince's "Secretariat Particulier" with the prince's name above the image of the Prince's crown. The envelope also bear's the Office of the Vice President's blue stamp. The Department of State's stamp, together with the October 14th date, is stamped in blue on the verso of the letter. Penciled at the top left of the letter is a request for a translation likely written by Art Sohmer: "State: Translation & suggested reply if appropriate". Accompanying Prince Moulay Abdullah's letter, which was written in French, is an official "Office of the Vice President / Referral" form addressed to Mr. James L. Carson, director of the State Department's Secretarial Staff. This form dated October 12, 1971 and signed by Major P.D. Slack, the Marine Corps Aide to the Vice President, requests that the letter be translated for Art Sohmer and the Vice President's benefit. The translation, typed on 10-1/2 inch high by 8 inch wide "Department of State Division of Language Services" letterhead, accompanies the letter. A referral number is stamped at the top of the Prince's letter as well as at the top of the referral form and the translation references this number. The brother of King Hassan II of Morocco, Prince Moulay Abdullah of Morocco (1935-1983) was married to Lamia Solh, the daughter of Lebanon's first Prime Minister. On July 10, 1971, General Mohamed Medbouh who was disillusioned by King Hassan's light treatment of staff members who were shown to have been shaking down foreign companies and convinced that the King may himself be involved, led a coup attempt. Conspiring with other military officers, Medbouh enlisted a force of 1,200 cadets to storm the palace during the King's birthday reception where, according to different sources, between 400 to 800 guests were present. 92 people were killed in the attempted coup and many more injured, including Prince Moulay Abdullah Ben Mohammad. Royalist troops overcame the rebels, killing more than a hundred cadets and capturing another 900 and their officers. Two weeks later, on July 25, 1971, Vice President Agnew visited Morocco. In his book, "Hunting the President: Threats, Plots and Assassination Attempts..." Mel Ayton quotes Chuck Vance who served on President Ford's protective detail and who described the risks of foreign visits by U.S. Presidents & Vice Presidents: "There's going to be some razzle dazzle so people aren't quite clear who to attack. They'll have military personnel everywhere: frogmen, ships, and aircraft. I called in a whole [naval] fleet one time in a Moroccan visit for [Vice President] Agnew because of political uncertainties", no doubt referring to this visit. It was during this visit that Agnew referred (or sent) the physical therapist to the Prince. Prince Moulay Abdullah, who was a favorite of his father, passed away from cancer in 1983 at the age of 48. Stade Moulay Abdullah stadium was named after him. Spiro T. Agnew [1918-1996] was Governor of Maryland and Vice President of the United States under Nixon. He was indicted for tax fraud and forced to resign. The recipient, Arthur J. Sohmer (1926-1991), was Chief-of-Staff to Vice President Spiro T. Agnew.