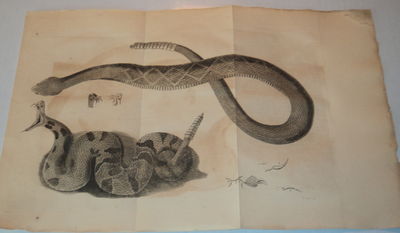 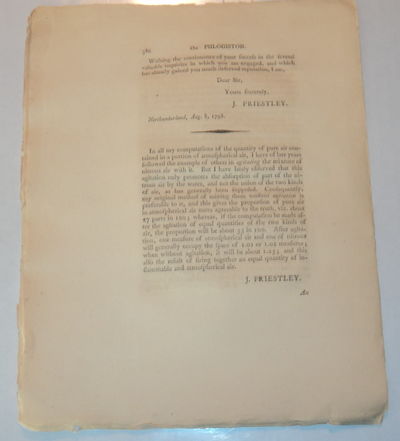 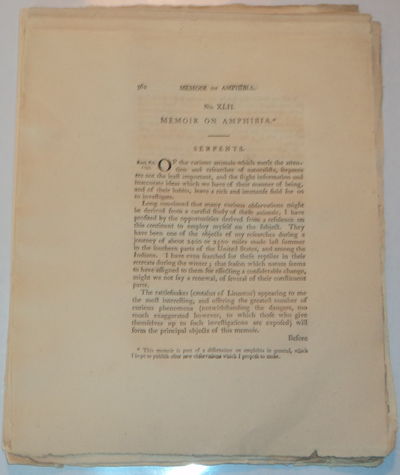 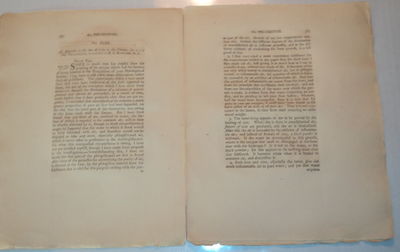 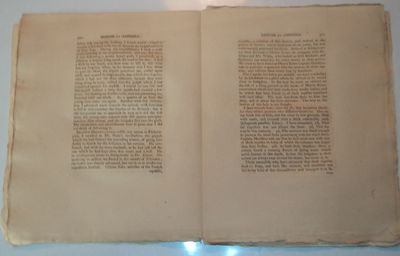 MEMOIR ON AMPHIBIA. NO. XLII. [From the "Transactions of the American Philosophical Society, volume IV"].

ILLUSTRATED WITH A LARGE FOLDING PLATE OF AN EASTERN DIAMONDBACK RATTLESNAKE - Quarto, 11-7/8 inches high by 9-1/8 inches wide. Unbound signatures from the "Transactions of the American Philosophical Society". 25 deckle-edged pages in all, with large uncut & untrimmed margins, consisting of pages 362 to 386. Illustrated with a large 11-1/2 inch high by 17-3/4 inch wide folding plate engraved by R. Scot depicting 2 views of an Eastern Diamondback Rattlesnake (Crotalus adamanteus). The top right corner of the folding plate is dampstained. The front edges of a few leaves are lightly chipped. Very good. Together with: "ON PHLOGISTON. NO. XLIII. An Appendix to the two Articles... by Dr. Priestley, in a Letter to B.S. Barton, M.D." consisting of pages 382 through 386. Unbound sheets from volume 4 of the "Transactions of the American Philosophical Society". The naturalist and botanist, Baron Palisot de Beauvois (1752-1820) led an adventurous life plagued by disasters. His 1786 exploration of the Gulf of Guinea was ill-fated from the start. Within 6 months, 250 out of the 300 men who'd accompanied him died of fever and he himself was so ill that he was transported to Haiti on a slave ship so that he could recuperate. His extensive botanical collections were burned when the English attacked the Owara trading station on the Gulf of Guinea. Another, a collection which he'd spent 3 years acquiring while in Haiti, was destroyed by Haitian insurgents along with his house. His American collections, acquired over 5 years, were lost in a shipwreck off the coast of Halifax. Beauvois was captured by Haitian insurgents only to be saved from execution by the intervention of a mulatto and deported to the United States. In 1793, he arrived in Philadelphia penniless as the American ship on which he traveled was intercepted by the British and his possessions were seized. The French revolutionary government had placed his name on the list of emigres, and condemned him to death should he return. He, at first, turned to teaching French and music to make a living and, after meeting Dr. Caspar Wistar and C.W. Peale, he worked preparing and publishing a descriptive catalog of Peale's museum holdings. He was elected to membership in the American Philosophical Society in 1792 and many of his first natural history papers were prepared for and published by the Society. He finally returned to France where he devoted the last 24 years of his life to the study of botany, publishing important papers and substantial works. Were it not for his losses, he would be considered the equal of Michaux as one of the most important early botanical explorers of North America.

Title: MEMOIR ON AMPHIBIA. NO. XLII. [From the "Transactions of the American Philosophical Society, volume IV"].

MEMOIR ON AMPHIBIA. NO. XLII. [From the "Transactions of the American Philosophical Society, volume IV"].