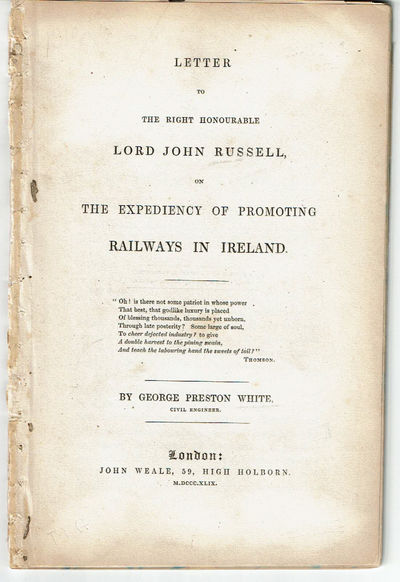 LETTER TO THE RIGHT HONOURABLE LORD JOHN RUSSELL, ON THE EXPEDIENCY OF PROMOTING RAILWAYS IN IRELAND.

- Octavo, unbound, removed. 40 pages. There is some soiling & darkening to the title page & the last page. The last leaf is detached with a small piece out of its top corner. There are small pieces out of the top corners of 2 other leaves. Good. Goldsmiths' Kress library of economic literature No. 36429. Lord John Russell (1792-1878) was Prime Minister of the United Kingdom from 1846-52 and 1865-66. Civil engineer George Preston White's letter to Russell promoting railways in Ireland was written in 1849, in the last year of the Irish "Great Famine", a period of mass starvation, disease and emigration between 1845 and 1849. Russell showed very poor leadership during this disaster. Though he continued Sir Robert Peel's grain exports to Ireland, he generally maintained a laissez-faire attitude towards the plight of the Irish, shifting the emphasis of relief to reliance on Irish resources. The purpose of White's letter, he explains, is to point out how the enormous expenses that railway companies have incurred in England can be avoided in Ireland and to show how the construction of railways "may form a safe and desirable investment to capitalism whilst at the same time they would produce the happiest effects of improving agriculture,--in affording means of profitably reclaiming the waste and bog lands in extending that important but hitherto neglected branch of commerce, the deep sea fishery...and finally, by calling into existence new branches of trade peculiar to the quickness of railway transit..." There is no doubt, he maintains "that such works would prove an alleviation of many of the evils by which Ireland is now overwhelmed; that emigration and those other costly expedients which have been resorted to, to meet a temporary exigence, would be found unnecessary; and that so far from the country being overpopulated, all the labor she is capable of affording might be profitably and beneficially employed at home."

Title: LETTER TO THE RIGHT HONOURABLE LORD JOHN RUSSELL, ON THE EXPEDIENCY OF PROMOTING RAILWAYS IN IRELAND.

LETTER TO THE RIGHT HONOURABLE LORD JOHN RUSSELL, ON THE EXPEDIENCY OF PROMOTING RAILWAYS IN IRELAND.