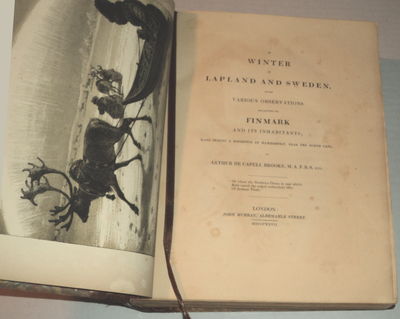 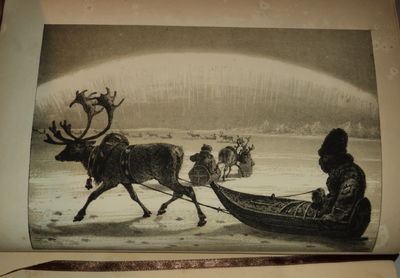 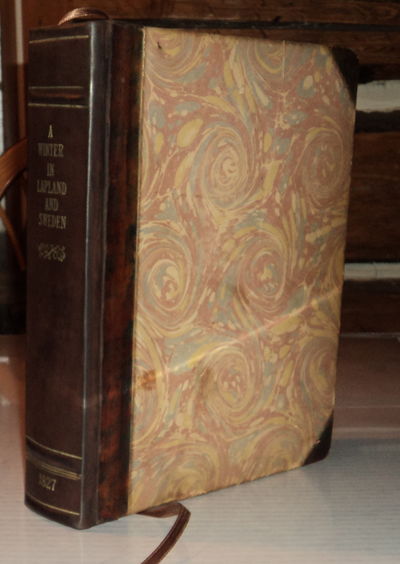 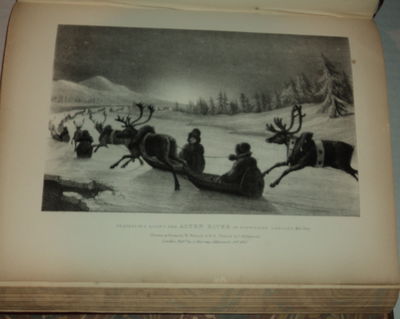 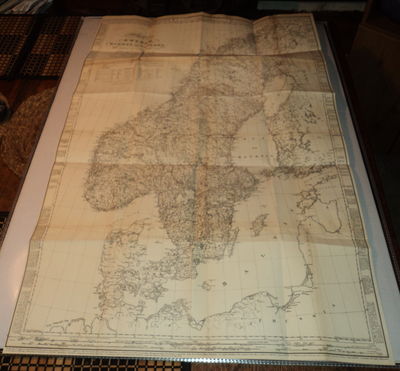 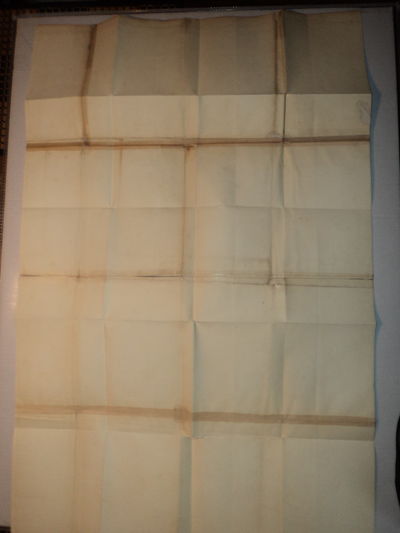 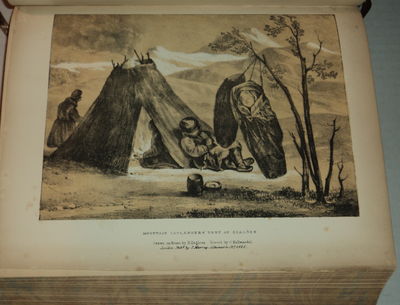 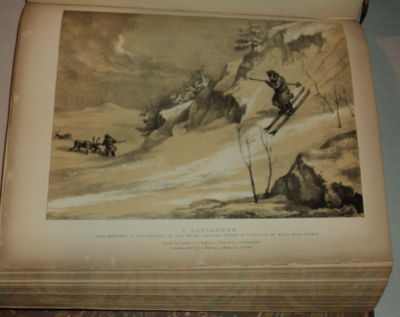 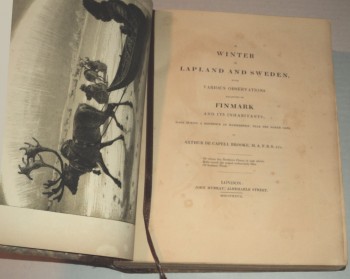 A WINTER IN LAPLAND AND SWEDEN, With Various Observations Relating to Finmark and its Inhabitants; Made during a residence at Hammerfest, near the North Cape. By Arthur de Capell Brooke, M.A.F.R.S. etc.

- Quarto, 11-1/8 inches high by 9 inches wide. Bound in contemporary three-quarter brown calf & marbled boards, rebacked with a new brown calf spine, titled with rules in gilt on the spine. The edges are marbled. The binding is enhanced by marbled endpapers with new maroon cloth hinges. The original covers are rubbed with minor wear to the corners and edges. xvi & 612 pages, illustrated with a lithographic plan of "The Port of Hammerfest", 21 full-page plates, including 6 tinted with colors, and 8 tipped-in lithographic vignettes on India paper, including 1 tinted with colors. A large 40-1/2 inch high by 26-1/4 inch wide lithographic folding map on linen, housed in a sleeve at the rear, further illustrates this volume. There are 2 horizontal and 1 vertical tears along the folds of the map which are repaired with early paper and paste on the verso and subsequently with archival document tape along the front. There are other minor tears along the folds and to the top edge. The front and rear endpapers and blank leaves of the book are slightly darkened with minor chips to the corners and there is some occasional, mostly minor, foxing throughout with some staining to page five. The edges of a few plates are darkened. Very good.

The large lithographic folding map, printed on linen, is titled "Map of Sweden, Norway, and Lapland, with numerous interesting and useful details, relating to the Climate, Productions, &c. of These Countries. By Lt. Coll. Hageistam, Translated from the Swedish by Arthur de Capell Brooke, F.R.S." The map's title is followed by a legend and "Explanation of the Terms, Marks, &c. occurring in the Map". Profuse annotations are printed along the borders of the map.

Although the author of a substantial review of Arthur de Capell Brooke's "A Winter in Lapland and Sweden" published in the May 1827 issue of "The Monthly Review" bemoans what he considers the present state of the Laplanders, he nonetheless praises Brooke's entertaining and insightful observations made during his stay at Hammerfest. "Mr Brooke is careful in distinguishing throughout his work, between the Laplanders and the Finlanders, and shews that, in many respects, there is a marked difference between them, greatly in favor of the latter, although several travellers have confounded the two nations" observes the reviewer. Brooke describes the well-sheltered bay of Hammerfest which the reviewer suggests is "sufficiently capacious to contain the whole British navy" and goes on to quote Brooke's description of the parties which frequently took place when ships would come in to port: "One evening, the whole small society of Hammerfest would come in their boats to drink punch and smoke their pipes at the Red House; and this number being swelled by the captains of the different vessels, the party was consequently pretty numerous. My little room then resounded with the loud effusions of hearts unacquainted with care, and little anxious about what the morrow would produce. These drinking bouts were conducted with such spirit, that it reminded me of the good old days, when our ancestors were in like manner worthy disciples of Anacreon...." Brooke concludes that description by providing a translation of the Norwegian national song which the revelers would frequently sing as the evenings wore on. The reviewer goes on to describe how Brooke distinguishes between what appear to be different tribes of Laplander and how he describes the Laplanders of Finmark who still "lead the lives of primitive shepherds" who, in the summer, "invariably migrate from the interior parts of Lapland to its coast, and visit the neighboring islands". He cites this as the reason for the infestation of gnats and insects which manifest in the warmer season, including one which deposits its eggs in the hide of reindeers. Brooke recounts how, though he's not witnessed it, it is said that upon arriving at the shore, the herd would drink salt water which is said to destroy the larvae of gad-fly which laid their eggs in the reindeer's hide. Brooke describes how, during their migration, the Laplanders carry all of their goods with them and will often trade these for brandy. Some go so far as to later need to trade some of their herd to reclaim those furs and necessities which they will need for the return trip. Though the Laplander's tents seem hardly effective in keeping the cold out, the reviewer remarks that Brooke describes how the inland Laplander's clothing are "sufficient to keep them perfectly warm, even when the thermometer is below zero". First Edition.

Title: A WINTER IN LAPLAND AND SWEDEN, With Various Observations Relating to Finmark and its Inhabitants; Made during a residence at Hammerfest, near the North Cape. By Arthur de Capell Brooke, M.A.F.R.S. etc.

Keywords: TRAVEL; EXPLORATION; NORTH; A WINTER IN LAPLAND AND SWEDEN; WITH VARIOUS OBSERVATIONS RELATING TO FINMARK AND ITS INHABITANTS; MADE DURING A RESIDENCE AT HAMMERFEST NEAR THE NORTH CAPE; NORTHERN EUROPE; FIRST EDITION; 1ST EDITION; NINETEENTH CENTURY; 19TH

A WINTER IN LAPLAND AND SWEDEN, With Various Observations Relating to Finmark and its Inhabitants; Made during a residence at Hammerfest, near the North Cape. By Arthur de Capell Brooke, M.A.F.R.S. etc.