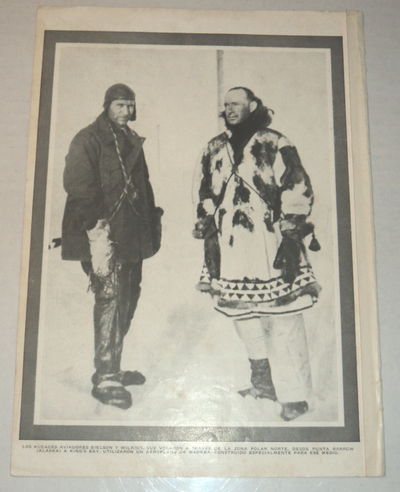 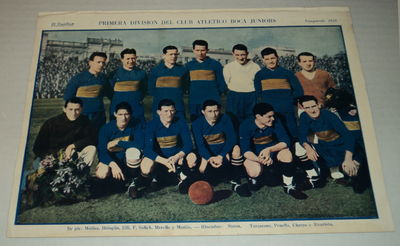 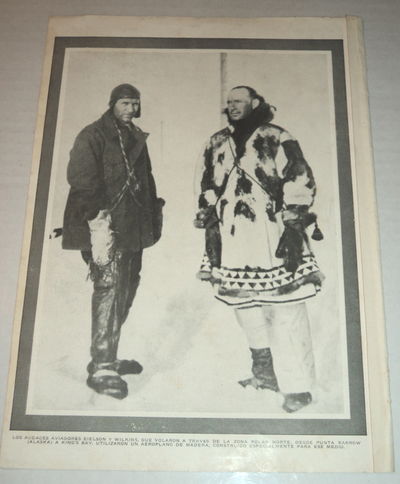 A vintage magazine photographic illustration of the AMERICAN AVIATOR CARL BEN EIELSON, in whose honor Alaska's Eielson Air Force Base is named, pictured with the Polar Explorer George Hubert Wilkins.

By: Eielson, Carl Ben (1897-1929). American aviator, bush pilot and explorer after whom Alaska's Eielson Air Force base is named.

- A 12-1/8 inch high by 8-3/4 inch wide leaf from the Argentinian sports magazine "El Grafico", with a full-page illustration of the American aviator & explorer Carl Ben Eielson, in the year he and Sir George Hubert Wilkins flew from North America over the North Pole to Europe. Eielson, attired in a heavy coat over pilot's leather pants and wearing a leather pilot's hat, is pictured against a background of snow next to the polar explorer George Hubert Wilkins. The corners are slightly creased and there are stab-marks along the page's right edge. A color illustration of the "Primera Division del Club Atletico Boca Juniors" soccer team is portrayed on the verso. Good. The American aviator, bush pilot and explorer Carl Ben Eielson (1897-1929) learned to fly in the U.S. Army Air Service in 1917 and served in the Signal Corps during the First World War. While supporting himself as a Capitol police officer while studying law at Georgetown Law School, he met Daniel Sutherland, then Alaska's delegate to Congress, who convinced him to move there. Eielson flew the first air mail in Alaska from Fairbanks to McGrath in 1924. In 1927, he explored the drift ice north of Alaska with the Australian Polar explorer George Hubert Wilkins and was the first to land a "land plane" onto drift ice. In 1928, Eielsen flew from Point Barrow, over the North Pole, to Spitsbergen, a 20 hour flight. He accompanied Wilkins on his Antarctic Expedition in 1928 and they were thus the first to have flown over both polar regions. Eielson established Alaskan Airways shortly before he and his mechanic Earl Borland died in a crash in Siberia as they attempted to evacuate crew and merchandise from the cargo ship, the Nanuk, trapped in the ice at North Cape. Founded by Constancio Vigil in 1919, "El Grafico" was an Argentine sports magazine which started as a weekly newspaper before subsequently turning exclusively to the coverage of sports. One of the most highly regarded sports magazines in Latin America, it came to earn the nickname "La Biblia de deporte" ("The Bible of sports").

A vintage magazine photographic illustration of the AMERICAN AVIATOR CARL BEN EIELSON, in whose honor Alaska's Eielson Air Force Base is named, pictured with the Polar Explorer George Hubert Wilkins.