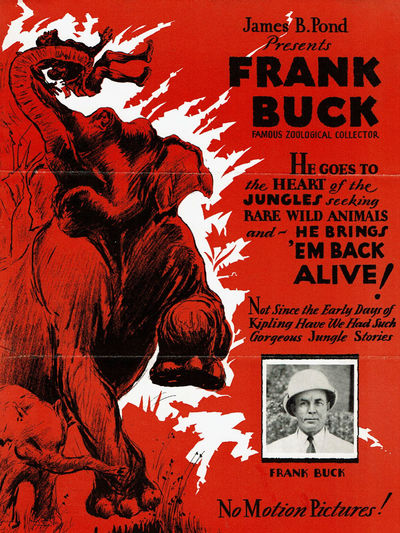 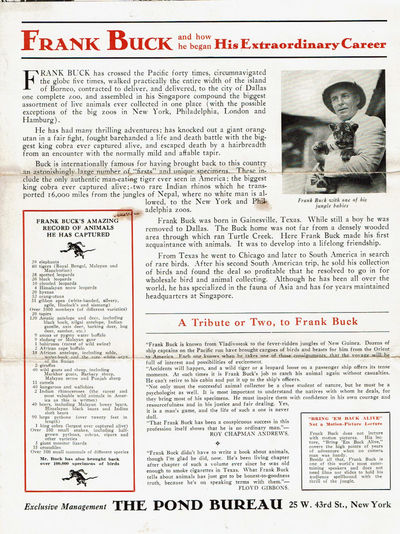 - Four-page brochure [11 inches high by 8-1/2 inches wide]. Softcover. The title page is illustrated with a black & flame-colored image of a rampaging elephant & its young, along with a black-and-white portrait of Frank Buck. The two center pages promote Buck's thrilling jungle stories of encountering and capturing dangerous wild animals with a border of black-and-white sketches of more animals on the attack, as well as native hunters. An account of Buck's career, a list of the animals he has captured and some tributes are included on the fourth page. There is a stain on page 3 & two small lighter stains on page 4. The brochure has been folded twice. Very good Frank Howard Buck [1884-1950] was an American hunter, animal collector and author, as well as a film actor, director and producer. Beginning in the 1910s he made many expeditions into Asia for the purpose of hunting and collecting exotic animals, bringing over 100,000 live specimens back to the United States and elsewhere for zoos and circuses. He co-authored books chronicling his expeditions,. The first of these, "Bring 'Em Back Alive", became a bestseller. In the thirties and early forties he starred in seven adventure films based on his exploits, most featuring "fights to the death" with various wild animals.