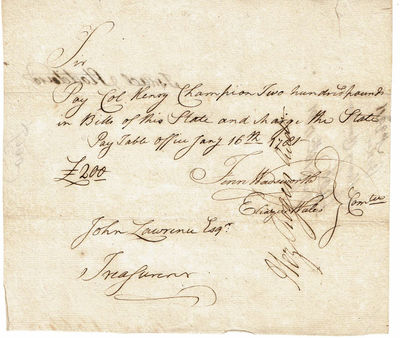 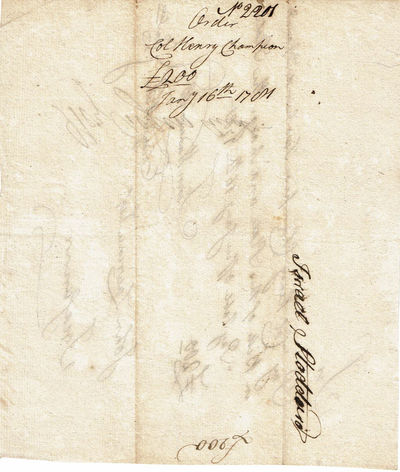 - Over 20 words penned on 6-3/4 inch high by 7-7/8 inch wide creamy white paper ordering that Colonel Henry Champion be paid the sum of 200 pounds. "Sir / Pay Col. Henry Champion Two hundred pounds in Bills of this State...." Dated January 16, 1781, the document is signed by State of Connecticut committee members Finn Wadsworth and Ebenezer Wales as well as treasurer John Lawrence. An additional difficult signature is vertically penned over those of the committee members. The document is docketed on the verso "No 2201 / Order / Col. Henry Champion / [pounds] 200 / Jan.y 16th 1781" and additionally endorsed by Israel Stoddard. Folded twice horizontally. Very good. Born in East Haddam, Henry Champion (1723-1797) enlisted in the Colonial militia in 1741. Achieving the rank of Lieutenant in 1750, Henry Champion led forces in the French and Indian War. Colonel Champion was selected by the Connecticut General Assembly in 1775 to be Commissary for the war effort and procure goods and provisions for the Continental Army. It is said that Henry Champion enlisted his daughter to deliver dispatches on horseback from New London to General Washington in Boston. Being a woman she could safely travel unencumbered through British lines. Colonel Champion was summoned by General George Washington during the Winter of 1777-1778 to lead a wagon train which would deliver supplies to the starving troops at Valley Forge. Colonel Champion and his son Epaphroditus commanded the wagon train which drove a herd of cattle over 300 miles to Valley Forge. Henry Champion was appointed sole Commissary General for the Eastern Department of the Continental Army in 1778.