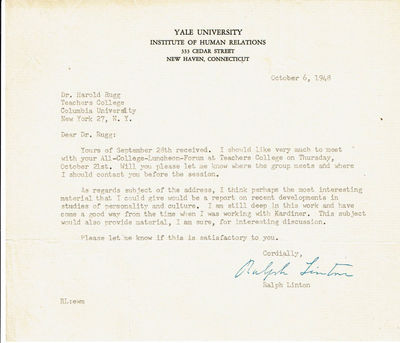 By: Linton, Ralph. (1893-1953). American anthropologist, one of whose major contributions to the field was defining a difference between status and role.

- Typed letter filling most of one side of a cream-colored 7-1/4 inch high by 8-1/2 inch wide sheet of "Yale University / Institute of Human Relations" letterhead. Signed "Ralph Linton". There is very light creasing to the top left corner of the letterhead. Folded twice for mailing. Near fine. Linton writes to Harold Rugg of Columbia University's Teachers College gladly accepting an invitation to take part in one of Rugg's lunch-time forums at the college. "As regards what subject to address, I think perhaps the most interesting material that I could give would be a report on recent developments in studies of personality and culture; I am still deep in this work and have come a good way from the time when I was working with Kardiner." Abram Kardiner [1891-1981] was a psychiatrist and pioneering psychoanalyst who made major contributions to psychological and psychoanalytic anthropology. Ralph Linton [1893-1953] was a respected American anthropologist, particularly remembered for his texts "The Study of Man" [1936] and "The Tree of Culture" [1955]. One of his major contributions to anthropology was defining a distinction between status and role. Harold Rugg [1886-1960] was an educational reformer associated with the Progressive education movement. Originally trained in civil engineering, he went on to study psychology, sociology and education at the University of Illinois. After teaching at the University of Chicago from 1915 to 1920, he took a job at the Teachers College of Columbia University where he stayed until he retired in 1951. He became a spokesman for the reconstructionist perspective which viewed formal education as an agent of social change.

Author Name: Linton, Ralph. (1893-1953). American anthropologist, one of whose major contributions to the field was defining a difference between status and role.