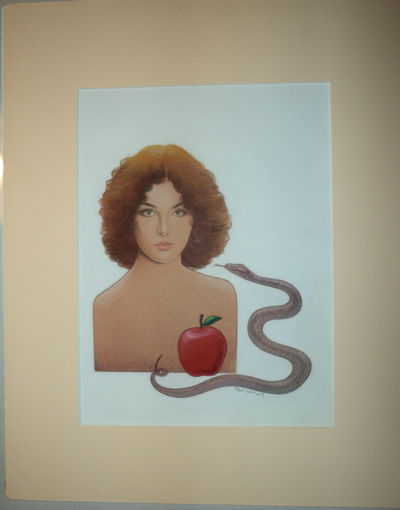 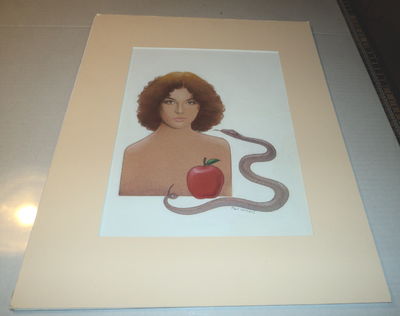 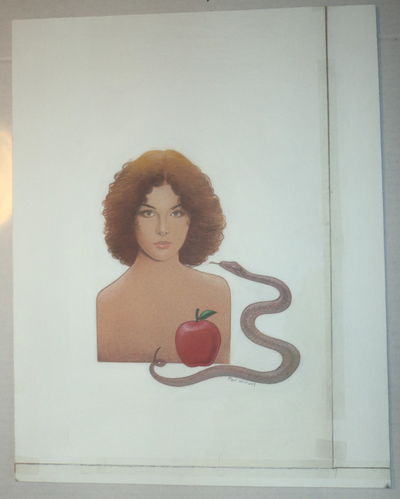 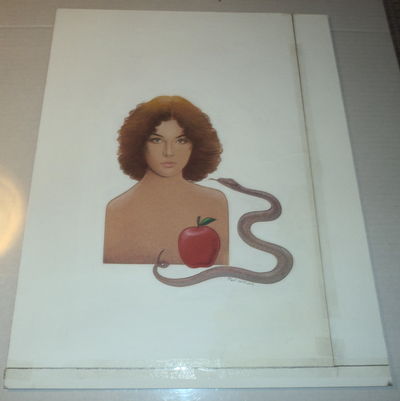 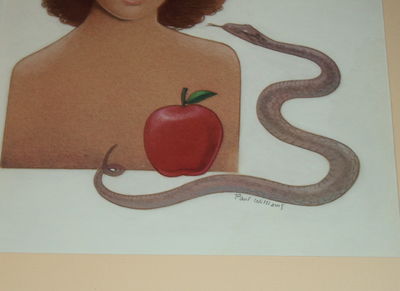 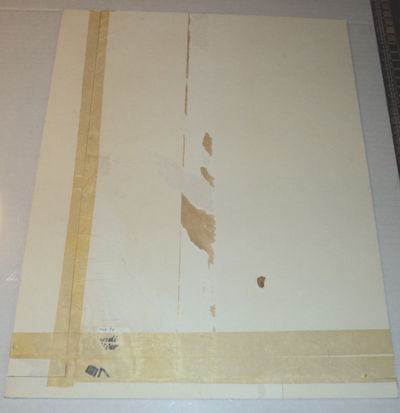 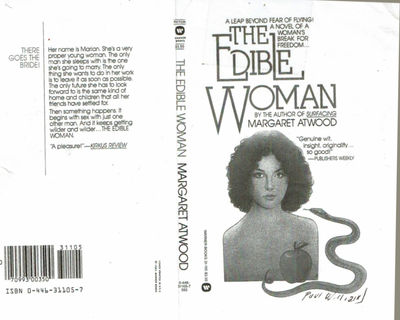 ORIGINAL SIGNED MIXED MEDIA PAINTING by PAUL WILLIAMS, for the cover of the Warner Books Paperback edition of MARGARET ATWOOD'S "THE EDIBLE WOMAN".

- An original 10-1/4 inch high by 8-1/2 inch wide mixed media painting mounted on 19 inch high by 13-1/2 inch wide art board for the cover illustration of the Warner Books edition of Margaret Atwood's "The Edible Woman". The image by Paul Williams depicts a red haired nude woman from the chest up, though without anatomical details, with a bright red apple in the foreground. A coiled gray snake frames the lower right corner of the young woman who is represented in soft peach tones with blue eyes. Signed by the artist Paul Williams at bottom right of the image. There is a small cut or tear to the art board at its bottom and a crease in the white area of the right side of the art work. Additional art board has been taped to the right edge and the bottom edge in order to extend those margins so that the watercolor would be centered when matted. A peach colored mat enhances the display. Very good. This original painting is one of several variant images which served to illustrate the cover of the Warner Books paperback edition of Margaret Atwood's "The Edible Woman". The American artist Paul Williams (1934-2013) studied at the Chadsey High School and Meinzinger Art School in Detroit before pursuing further studies at the Art Center School in Los Angeles. After working for years as a successful commercial artist, Williams dedicated himself to painting in his studio in Weston Connecticut. Though color blind, according to an article in the February 15, 2013 issue of Antiques and the Arts Weekly: "his works were masterfully done with brush strokes full of different color paint, evoking a special nostalgia and serenity -- 'a calm, peace and joy.'" Williams was a member of several guilds, including the Society of Illustrators and the Society of American Impressionists. In addition to being an accomplished artist, Paul Williams was an antique collector, acquiring and restoring early arms and armor, clocks, European furniture, etc.

ORIGINAL SIGNED MIXED MEDIA PAINTING by PAUL WILLIAMS, for the cover of the Warner Books Paperback edition of MARGARET ATWOOD'S "THE EDIBLE WOMAN".