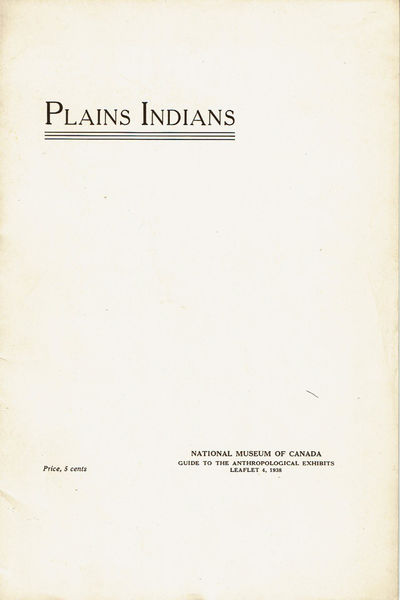 By: (National Museum of Canada).

- Octavo, softcover bound in cream-colored printed wraps. 10 pages. Black-and-white illustrations, including a map showing the territory of the tribes. Very good. National Museum of Canada's guide to the Anthropological Exhibits. Leaflet 4, 1938. "There were five tribes on the plains in the eighteenth century, the Blackfoot, Assiniboine, Sarcee, Gros Ventre, and Kootenay. The Gros Ventre retired southward into the United States about 1899, and the Kootenay crossed the Rocky Mountains into British Columbia; but many Cree Indians, and even some Ojibwa, moved out onto the plains to take their place." In the mid-eighteenth century there were about 25,000 Plains Indians but the tribes were decimated by two terrible smallpox epidemics. At the time of this publication, only about 15,000 were left, though their numbers were slowly increasing.