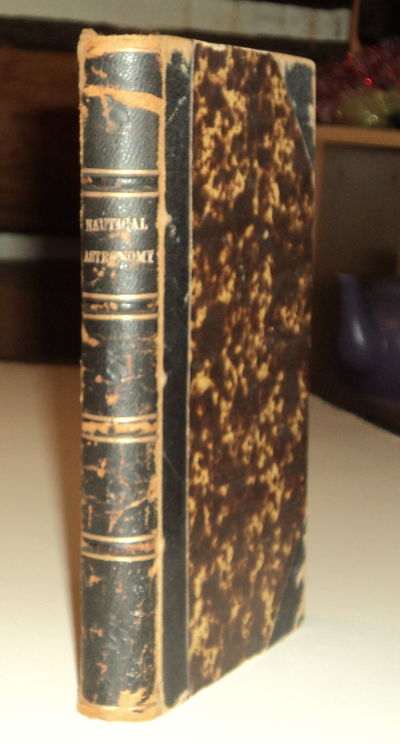 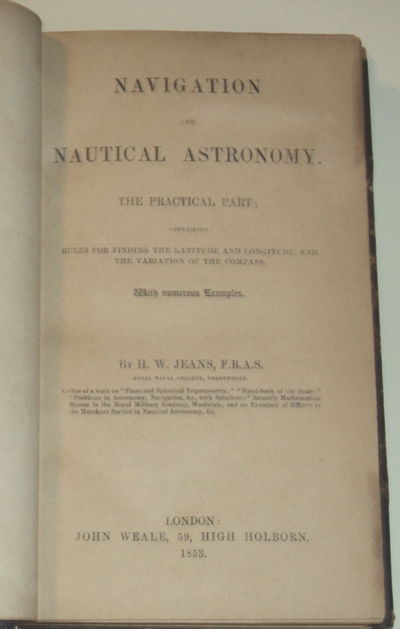 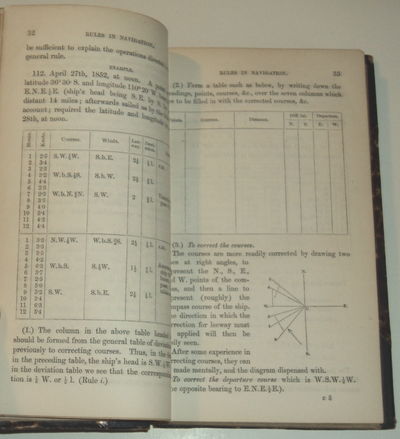 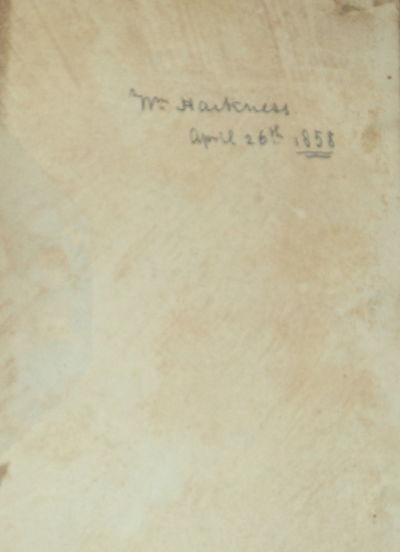 NAVIGATION AND NAUTICAL ASTRONOMY. The Practical Part; Containing Rules for Finding the Latitude and Longitude, and the Variation of the Compass. With Numerous Examples.

FROM THE LIBRARY OF THE SCOTTISH-AMERICAN ASTRONOMER WILLIAM HARKNESS, SIGNED BY HIM - Octavo, 7-3/8 inches high by 4-1/2 inches wide. Three-quarter black leather & marbled boards, titled in gilt with raised bands on the spine. The covers are rubbed and the leather is scuffed. The rear cover is detached. 279 pages, illustrated with textual diagrams. There is offsetting to the endpapers and pastedowns with minor chipping to the edges of the endpapers. The edges of the title page are darkened and the pages are toned. A complete copy of the rare first edition well worth rebinding. First edition. A wonderful association copy from the library of the Scottish-born American astronomer William Harkness, with his name and the date "April 26th, 1858" signed in pencil on the front pastedown. 1858 was the year he graduated from the University of Rochester. The Scottish-born American astronomer William Harkness (1837-1903) studied at LaFayette College and the University of Rochester before pursuing further studies in medicine in New York City. A surgeon in the Union armies during the Civil War, he also served as an aid in astronomy at the United States Naval Observatory and subsequently on the USS Monadnock. He discovered the coronal line K1474 while observing the August 1869 solar eclipse. As a member of the Transit of Venus Commission, he was in charge of the group at Hobart, Tasmania in 1879 and subsequently of that in Washington in 1882. Harkness contributed to the construction and improvement of telescopes and invented several astronomical instruments, including the spherometer caliper. He went on to serve as astronomical director of the Naval Observatory from 1894 through 1899 and director of the Nautical Almanac from 1897 through 99 and was president of the American Association for the Advancement of Science. His published works include "The Solar Parallax and its Related Constants" (1891). First Edition.

Title: NAVIGATION AND NAUTICAL ASTRONOMY. The Practical Part; Containing Rules for Finding the Latitude and Longitude, and the Variation of the Compass. With Numerous Examples.

NAVIGATION AND NAUTICAL ASTRONOMY. The Practical Part; Containing Rules for Finding the Latitude and Longitude, and the Variation of the Compass. With Numerous Examples.