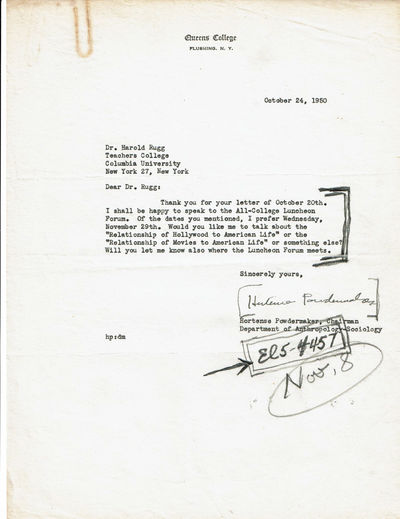 By: Powdermaker, Hortense. (1900-1970). American anthropologist, best known for her ethnographic studies of African Americans in Indianola, Mississippi and of Hollywood.

- 566 words typed on an eleven inch high by 8-1/2 inch wide sheet of Queens College letterhead. Signed "Hortense Powdermaker " with her name and "Chairman Department of Anthropology-Sociology" typed below the signature. There is light creasing to the top & bottom edges of the letter with a paperclip mark to the top edge. The recipient has heavily marked the letter with a phone number and date & with brackets around the body of the letter and Powdermaker's signature. Folded 3 times for mailing. Good. Powdermaker writes that she will be be happy to speak at Rugg's All-College Luncheon Forum. "Would you like me to talk about the 'Relationship of Hollywood to American Life' or 'The Relationship of Movies to American Life'" or something else?" Hortense Powdermaker [1900-1970] was an American anthropologist, best known for her ethnographic studies of African Americans in Indianola, Mississippi and of Hollywood. After studying at Goucher College and working as a labor organizer for the Amalgamated Clothing Workers, she left the United States to study at the London School of Economics. While at LSE she worked under and was influenced by several well-known anthropologists, including Bronislaw Malinowski, who persuaded her to pursue doctoral studies. She completed her Ph.D. on "Leadership in Primitive Society" in 1928. Returning to the United States, she was given an appointment at the new Yale Institute of Public Relations. The institute's director Edward Sapir encouraged her to apply ethnographic field methods to the study of communities in her own society. As a result she conducted anthropological field work in an Indianola African American community, recording this work in "After Freedom: A Cultural Study in the Deep South" [1939]. Her other best known book, "Hollywood, the Dream Factory" [1950] was written while she was working at Queens College where she founded the departments of Anthropology and Sociology during a career spanning three decades. One of the best-known educators during the Progressive era of education, Harold Rugg (1886-1960) was a professor of education at Teachers College of Columbia University. A Civil Engineer, he had become interested in how students learn and pursued a doctorate in education. He was responsible for producing the very first series of school textbooks from 1929 until the 1940s.