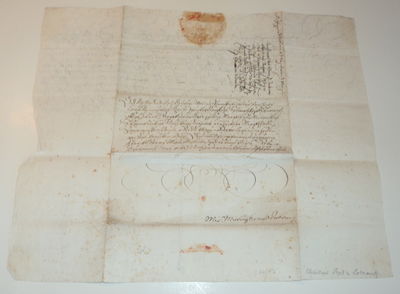 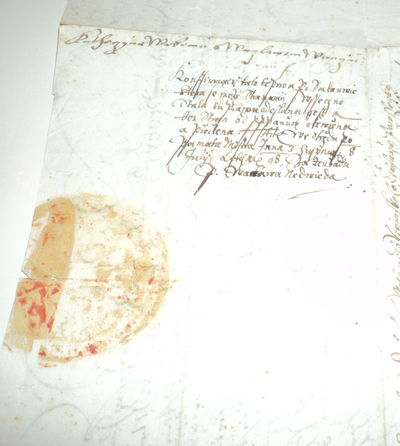 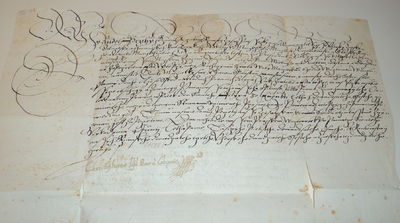 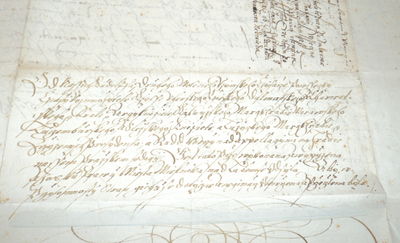 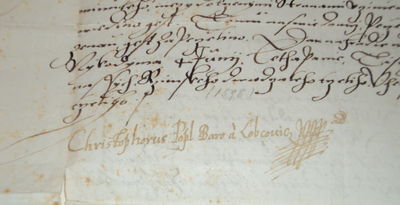 - An original holograph document attractively penned in an unknown hand on 13-1/4 inch high by 15-5/8 inch wide cream paper. Fifteen lines boldly penned with several flourishes, signed "Christophorus Popel Barro a Lobcowicz" by Christoph Popel, Baron of Lobkowicz who was Chief Steward of Bohemia under the Holy Roman Emperor Rudolf II. The document is further annotated with 8 lines penned across the center of the verso with an unidentified signature and another 8 lines penned vertically on the verso above the center panel, also with an unidentified signature. The faint remnants and outline of a red wax seal are centered at the top and bottom edges of the verso. Folded twice vertically and four times horizontally, with several tears along the folds. There is some foxing present, especially at the top and bottom. Good. The Chief Steward of Bohemia under Emperor Rudolf II, Christoph Popel, Baron of Lobkowicz (1549-1609), was a close friend of the celebrated court painter Hans von Aachen. Lobkowicz, who was known for his language and diplomatic skills, was tasked with welcoming visitors from within and without the Holy Roman Empire to the Emperor's Court and for negotiating alliances in the war against the Turks. Lobkowicz was responsible for the peace negotiations with the Polish King Sigismund. Lobkowicz spent considerable sums on art work for his residence and commissioned jewelry, precious watches and valuable objects. He was buried in the chapel in the Prague Cathedral.