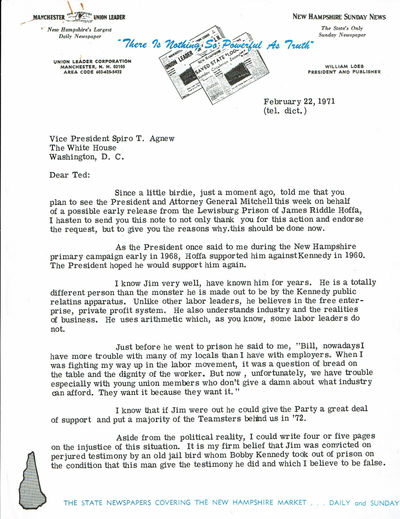 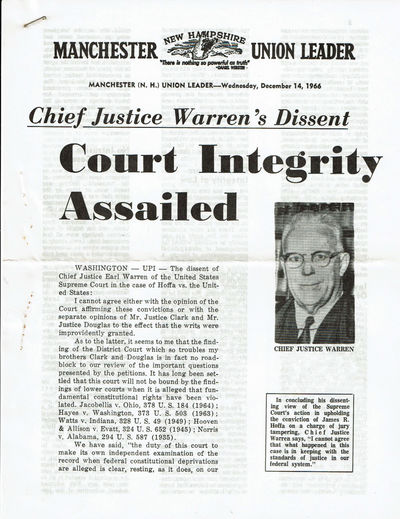 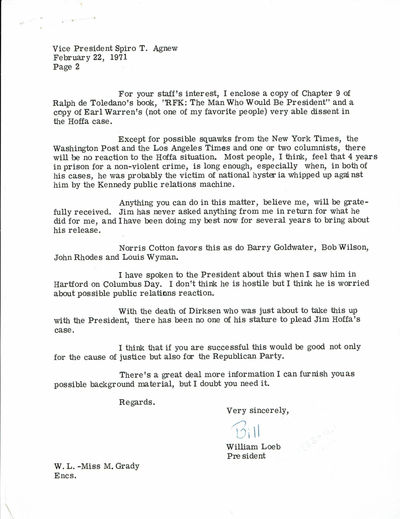 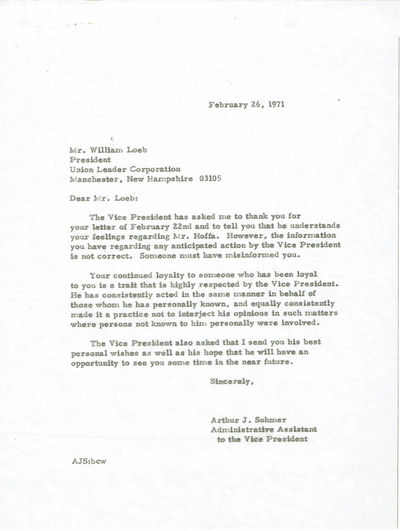 - Two pages, typed on 2 sheets of 11 inch high by 8-1/2 inch wide paper. The first page is typed on Loeb's personal "Manchester Union Leader / New Hampshire Sunday News" stationery. Loeb writes to Vice President Spiro Agnew in support of the former Teamster president Jimmy Hoffa who had been convicted of racketeering under the Kennedy administration: "Since a little birdie, just a moment ago, told me that you plan to see the President and Attorney General Mitchell this week on behalf of a possible early release from the Lewisburg Prison for James Riddle Hoffa, I hasten to send you this note to not only thank you for this action and endorse the request, but to give you the reasons why this should be done now." Loeb outlines how Hoffa's release could benefit the Nixon administrations future re-election campaign in 1972: "I know that if Jim were out he could give the Party a great deal of support and put a majority of the Teamsters behind us in '72". Loeb mentions enclosing a copy of Earl Warren's dissent in the Jimmy Hoffa case as justification for releasing Hoffa. He mentions speaking to Nixon about it on Columbus Day "I don't think he is hostile but I think he is worried about possible public relations reaction." Signed "Bill". A blue stamp on the verso of the second page attests that the letter was "Received Feb 14 1971 / Office of the Vice President". Folded for mailing with minor creases to the edges, tiny staple holes and indentation from a paper clip to the top left corner. Together with the December 14, 1966 four-page issue of the "Manchester Union Leader" in which Loeb had published Justice Warren's dissenting opinion in the Hoffa case. Also stapled to the letter are 3 carbon copies of Agnew's Administrative Assistant Arthur J. Sohmer's reply. Sohmer thanks Loeb for his letter but informs him that the VP "understands your feelings regarding Mr. Hoffa. However, the information you have regarding any anticipated action by the Vice President is not correct." He goes on to express his recognition of Loeb's loyalty to Hoffa. Ironically, the ultra-conservative publisher of the Manchester Union Leader newspaper William "Bill" Loeb III (1905-1981) was a good friend of Teamster president Jimmy Hoffa. Maybe not that surprising given that the AFL-CIO had banished the Teamsters from their rank due to Hoffa's corrupt use of his Union. The newspaper, which already tilted towards Republican causes and support, veered even more sharply to the right when Loeb purchased it in 1946. It quickly became one of the country's most conservative newspapers. Loeb is perhaps best remembered for assisting in the forgery and publication of the "Canuck letter" which ultimately brought Edmund Muskie down in 1972. He was also not beyond attacking the children of democratic politicians and gained infamy for his attack on governor Walter Peterson's teenage child who was alleged to support the use of marijuana. The stress resulting from the public scrutiny resulted in the girl's subsequent nervous breakdown. Richard Nixon did eventually grant an early release, commuting Hoffa's sentence in December of that year.