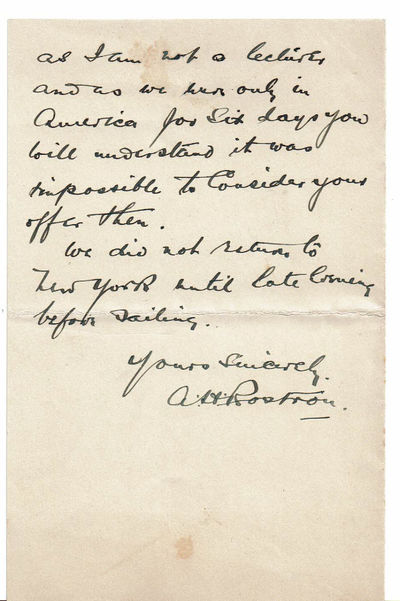 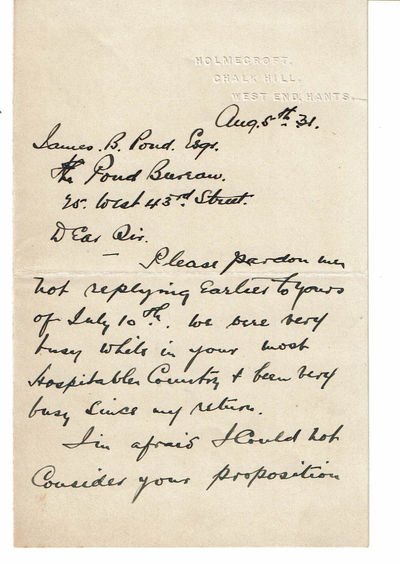 LETTER SIGNED by HERO OF THE TITANIC ARTHUR ROSTRON

- Approximately 75 words penned on two sides of a folded sheet of creamy white letterhead. Measuring 7 inches high by 4-1/2 inches wide, the letter is addressed to the American tour manager James B. Pond of the Pond Bureau. In his letter Arthur Rostron apologizes for his late response to Pond's letter. "I'm afraid I could not consider your proposition as I am not a lecturer and as we were only in America for six days you will understand it was impossible to consider your offer then." The letter is signed "Yours Sincerely / A.H. Rostron." Rostron's address is embossed at the head of the letterhead: "Holmecroft / Chalk Hill / West End, Hants.". There are a couple of small minor stains to the second leaf and the letter has been folded once for mailing. Else, near fine. Arthur Rostron (1869-1940) was the captain of the Carpathia and led the rescue of more than 700 survivors of the sinking Titanic after it struck an iceberg. Rostron received numerous honors, including the Congressional Gold Medal of the U.S. Congress. He was appointed Knight Commander of the Order of the British Empire.

Title: LETTER SIGNED by HERO OF THE TITANIC ARTHUR ROSTRON

Author Name: Rostron, Arthur (1869-1940). Captain of the RMS Carpathia and hero of the Titanic disaster.

LETTER SIGNED by HERO OF THE TITANIC ARTHUR ROSTRON