(Moscow: Malysh Publishers, 1981).. 1981).. Very good. - Quarto [10-3/4 inches high by 8-3/8 inches wide], softcover bound in pictorial white wrappers. The wraps are lightly bumped with an importer's label on the rear wrap. 10 & [2] pages. Profuse color illustrations by N. Charushin. Very good. A delightfully illustrated Chekhov story about a she-wolf who is getting too old to hunt and a puppy who follows her home and plays with her cubs.
View More...

THE SHERIFF OF ROTTENSHOT: Poems by Jack Prelutsky

THE HOUSE OF A THOUSAND CANDLES

A WONDER BOOK FOR GIRLS AND BOYS. With Illustrations by F.S. Church

Boston: Houghton, Mifflin and Comapny, 1885.. 1885.. Fair. - Quarto, pictorial red cloth titled with vignettes in gilt on spine and titled in gilt with illustration of a winged horse leaping over the moon on the front cover. All edges gilt. The covers are rubbed, stained & soiled. 150 pages. Frontispiece and numerous illustrations by F.S. Church. The binding is cracked and several leaves and signatures are loose. A complete copy.
View More...

THE SLEEPING BEAUTY AND OTHER TALES. Retold by Roger Lancelyn Green.

- Small quarto [9-7/8 inches high by 7-3/8 inches wide], green cloth in a price-clipped color pictorial dust wrapper. The tail of the spine is creased & the corners are lightly bumped. The top edge of the dust jacket & the tail of its spine are lightly chipped and its rear panel is lightly soiled. 78 & [1] pages. 10 color plates, including a frontispiece, by Rene Cloke. Very good. Second printing. Three tales originally retold by Charles Perrault in 1697. The other two tales are "Puss in Boots" and "Cinderella". Dust jacket present.
View More...

TOMMY TRY, AND WHAT HE DID IN SCIENCE.

- Octavo, green cloth titled in gilt on the spine. The binding is bumped & lightly rubbed with the top corner of the rear cover slightly frayed. The head & tail of the spine are slightly chipped. vii, [i] & 303 pages. Illustrated in black & white by H. D. Cooper & others with 7 plates, including a frontispiece with a tissue guard, an extra vignette title & many textual illustrations. There is foxing throughout. A good, tight copy. First edition.Told in the first person by "Tommy", this is a book about a boy learning to educate himself with an emphasis on science and natural hist...
View More...

Princeton, NJ: Cotsen Children's Library, (2007).. (2007).. Fine. - Small quarto [9 inches high by 6-1/2 inches wide], softcover bound in pictorial color wrappers. 21 & [2] pages, including inside wraps. 18 pages of color illustrations with minimal text at the foot of the pages. Near fine. Laid in is a mechanically reproduced note from the Friends of the Princeton University Library, which explains that this publication celebrates the tenth anniversary of the Cotsen Children's Library. "We hope you enjoy this whimsical representation of the party Cotsen would have hosted, if it had been...
View More...

KEEPSAKE FOR THE YOUNG. A Book of Amusement. By Aunt Friendly, Author of "The Holiday Album," "The Gift Book," Etc. With One Hundred and Eighty [Full-] Page Illustrations

London: Frederick Warne and Co. / New York: Scribner, Welford, and Co., circa [1871].. [1871].. Very good. - Octavo, bound in reddish brown patterned sand-grain cloth blocked in gilt, black & blind. The front cover is decorated with a blue paper onlay border design blocked in gilt with miniature illustrations including Puss-in-Boots, a frog with an umbrella, a mermaid, a witch, a youth holding up a giant's decapitated head, a boy with a lyre and birds emerging from a pie. The spine is blocked in gilt with similar illustrative elements & is imprinted "Little Folks Library" at the tail...
View More...

LOB LIE-BY-THE-FIRE, THE BROWNIES / And Other Tales.

- Small octavo, reddish brown cloth titled in brown & gilt with profuse decorations in black on the front cover & spine. The binding is rubbed & bumped & the head & tail of the spine are lightly chipped. 268 pages plus 4-page publisher's catalog. Illustrated with 6 black-and-white plates by George Cruikshank, including a frontispiece. The front hinge is cracked . There are glue stains & a tear to the surface of the front pastedown, possibly where a label has been removed. There is an owner's bookplate on the front endpaper & a gift inscription on the verso of the frontispiece. The book is ligh...
View More...

(NY): Longmans Green and Co., (1929).. (1929).. Very good. - Octavo, maroon cloth titled in gilt with illustration of a ship in full sail stamped in gilt on the front cover. The covers are lightly bumped. The spine is faded with tiny white stains. [xii], 304 & [1] pp. There is an owner's name on the half-title & a brown marking to 1 page of the text. Color frontispiece & pictorial title, 9 B&W plates & B&W head-pieces by James H. Daugherty. Very good. First edition. First Edition.
View More...

THE ART OF BABAR: The Work of Jean and Laurent de Brunhoff

- Square octavo, color pictorial paper covered boards titled in red on front board. The boards are rubbed & darkened; the lower half of the backstrip is lacking; the joints are rubbed & the head of the spine is chipped. 46 & [2] pages. Profuse full-page & textual illustrations in color & black-and-white from the Walt Disney film of "Snow White". The pages are darkened; parts of 1 full-page black-and-white illustration have been delicately colored. Good. First French edition of the Disney "Snow White"..The text is in French.
View More...

THE SAVIOUR OF THE WORLD: Scripture Stories for Children

THE BLACK HEART OF INDRI

New York: Charles Scribner's Sons, (1966).. (1966).. Very good. - Quarto, mauve paper covered boards, in a pictorial dust wrapper. The boards are lightly bumped with the extremities slightly faded. There is a tear to the tail of the spine. The dust jacket is rubbed & chipped with a tear to the tail of its spine & some tiny black marks to its rear panel. Unnumbered pages, including profuse full-page & textual color illustrations by Janina Domanska. The contents are very good. First edition.An adaptation of a Chinese fairy tale. Dust jacket present. First Edition.
View More...

PLAYS FOR CHILDREN IN FRENCH AND ENGLISH

Philadelphia, PA: The Penn Publishing Company, 1923.. 1923.. Very good. - Square octavo, pictorial gray & cream paper covered boards with color illustration on the front board. The boards are bumped & rubbed with soiling to the rear board; there are small pieces out of the paper at the bottom corners of the boards & the head of the spine. Each play is separately paginated. Illustrated with 5 B&W plates by Mary Rose Donovan & with set diagrams. The contents are very good. The plays are "Beauty and the Beast", "Bluebeard", "Cinderella", "Red Riding Hood" and &#...
View More... 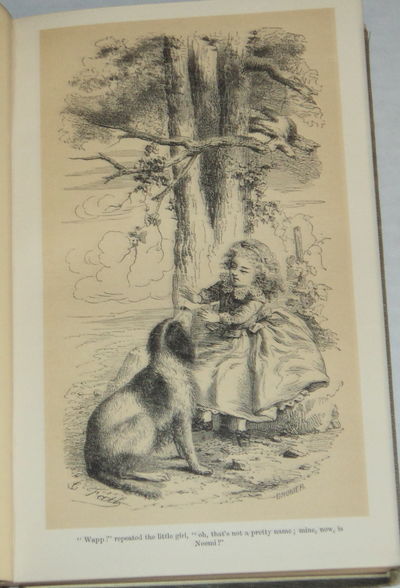 STORIES OF AN OLD MAID RELATED TO HER NEPHEWS AND NIECES. Translated from the French ... by Alfred Elwes.

ILLUSTRATED WITH FULL-PAGE PLATES BY G. FATH & GUSTAVE DORE - Octavo, green cloth titled with vignettes in gilt on the spine & the front cover. All edges are gilt. The rear cover is detached and the covers are dampstained, bumped & rubbed with wear to the edges. The spine is chipped with a substantial piece out from the top and the cloth is splitting along the front joint. 232 pages, illustrated with a portrait frontispiece by S. David, an extra engraved title page by G. Fath and 6 full-page plates by G. Fath and 8 plates by Gustave DorÃ©. There is a 2 inch tear along the top inner edge of ...
View More...